Dirk Nowitzki's number 41 to be retired

The Dallas Mavericks will retire Dirk Nowitzki's number 41 jersey after tonight's game against Golden State. He spent his entire 21-year NBA career with the Mavs.

DALLAS - Dallas Mavericks legend Dirk Nowitzki will have his jersey retired and raised to the rafters Wednesday night at the American Airlines Center.

The ceremony will happen after the Mavericks game against the Golden State Warriors. Nowitzki was emotional on Tuesday as he met with the media and discussed what the fans of North Texas mean to him.

"I’ve got to say I’ve had a little bit of time the last two-to-two and a half years to read some letters I have gotten or when I'm out on town, how many people have come up to me and said thank you for my services. So it's special. Special, special," he said.

Nowitzki choked up just once during the news conference that went just under an hour. 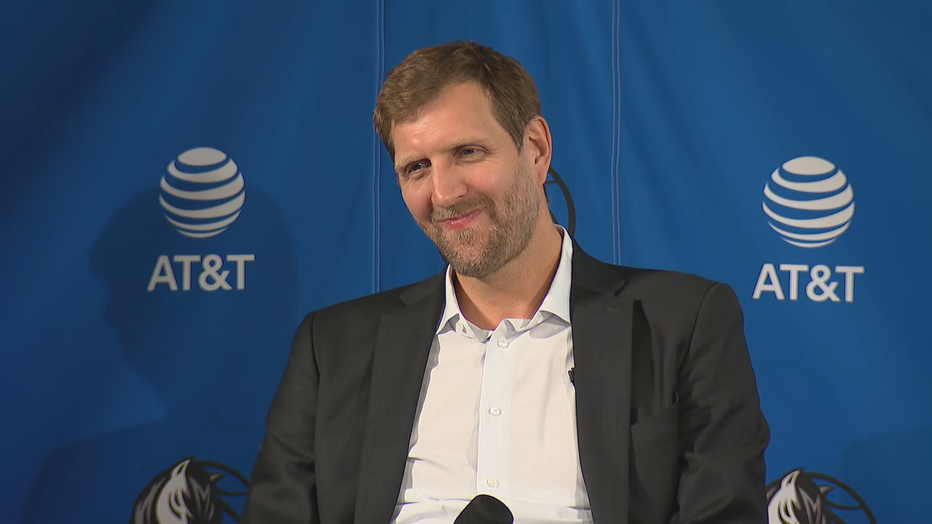 Very few around North Texas had heard of Dirk when the Mavs took the 20-year-old German in the first round of the 1998 draft. FOX4’s Mike Doocy asked Nowitzki if he could have imagined back then that things would turn out the way they did.

"I didn’t really know what to expect, I think we all know that. Coming off the plane, all I had seen was my parents watching the show Dallas and on TV and me looking at it by passing, so I wasn't really sure what the city looks like. How the NBA would be like, how I’d only watched it on TV before. I think nobody really saw this coming, even my closest supporters," he said.

Dirk's memorabilia will be on display in the AAC concourse when the doors open for ticket holders before the game Wednesday afternoon. The first 4,100 fans will get a Dirk bobblehead. All fans will get a Dirk jersey rally towel and a Dirk NFT. The game itself tips at 6:30 p.m.

Afterward, NBA Commissioner Adam Silver, Mavericks owner Mark Cuban and dozens of Dirk's former teammates and friends will be on stage for the retirement ceremony. Mavs fans will be able to watch the ceremony on Bally Sports Southwest.

Dirk Nowitzki returning to the Dallas Mavericks as special advisor

Luka Doncic, Dirk Nowitzki become first Mavericks to be on the cover of NBA 2K game

Dirk Nowitzki talks about life at home a year after retiring

Dirk Nowitzki adjusting to life at home after basketball

Dallas Mavericks legend Dirk Nowitzki talked to FOX 4's Mike Doocy and Sam Gannon about his life at home after basketball. He also talked about a recent incident where a former Mavs player came to his rescue.