Dallas leaders enacted a curfew after weekend protests turned violent in some parts of the city.

DALLAS - Dallas leaders enacted a curfew after weekend protests turned violent in some parts of the city.

The weekend was marked by protests against police brutality sparked by the death of George Floyd in Minneapolis police custody last week.

In Dallas, many protests were peaceful. But there was also widespread vandalism and looting Friday and Saturday nights.

After the curfew went into effect Sunday night, the streets of Downtown Dallas were fairly quiet. Officers began telling people to go home right at 7 p.m. Many followed the order and left. 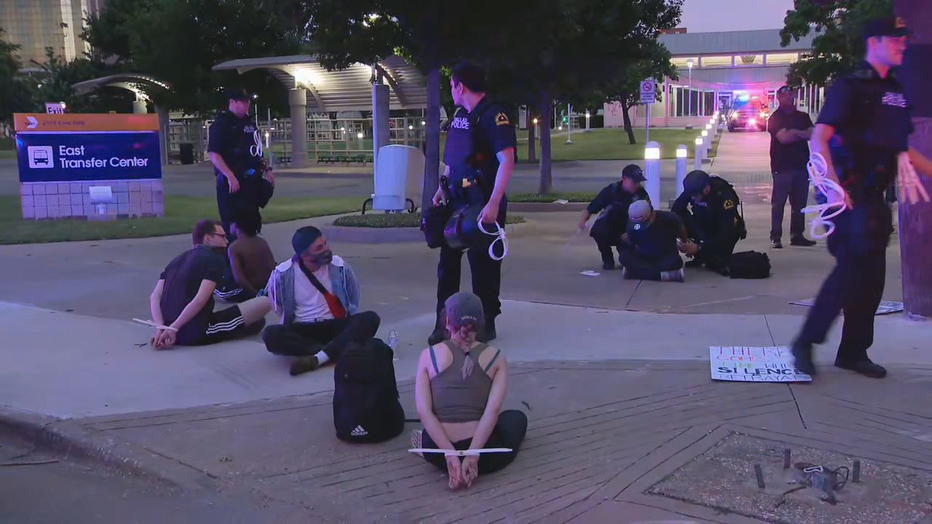 No businesses were vandalized Sunday night.

Police did deploy tear gas and fire pepper balls in some areas to get crowds to scatter.

Dallas police and state troopers detained dozens of people who did not leave in parts of the Downtown Dallas area.

The Dallas Police Department said 76 people were arrested and jailed and about 45 to 60 more were being processed to go to jail.

Dallas mayor says he supports protesters but not the violence

Dallas Mayor Eric Johnson joined Good Day to talk about the protests over the weekend. Some turned violent and ended with looting and vandalism.

"I do believe that to some extent, there is an effort to oppress or silence protesters but at the same time, I do understand that there are businesses and people and destruction of property. But I will say, property can be rebuilt, commodities can be replaced. George Floyd can’t,” said Aden Suarez, who was out demonstrating on Sunday.

Dallas was mostly calm on Sunday afternoon but there were several protests.

At a vigil at DPD headquarters, Mavericks owner Mark Cuban and several Mavs players joined demonstrators who gathered in prayer. And at Klyde Warren Park, more than 100 peaceful protestors gathered and marched.

The Dallas curfew will be in place every night from 7 p.m. to 6 a.m. in Uptown, Victory Park, Farmers Market, Downtown and Deep Ellum.

Chief Hall did not say when the curfew will be lifted.

The city of Denton has a curfew in place from 9 p.m. to 6 a.m. for parts of the city including the downtown area, courthouse, jail facility and other areas near the Denton County building complex. That curfew will go through June 7.

Gov. Greg Abbott declared a state of emergency for the entire state and activated the National Guard Saturday. There did not appear to be any guard members active or in place in Dallas on Sunday.