After a second&nbsp;night of looting and vandalism in Dallas, more business owners are now having to clean up the damage left behind at their stores.

DALLAS - After a second night of looting and vandalism in Dallas, more business owners are now having to clean up the damage left behind at their stores.

A number of shops had their windows broken by vandals, and items taken from inside.

Protests over the death of George Floyd started peacefully on Friday and Saturday, but then some in the group started damaging businesses and looting what was inside. 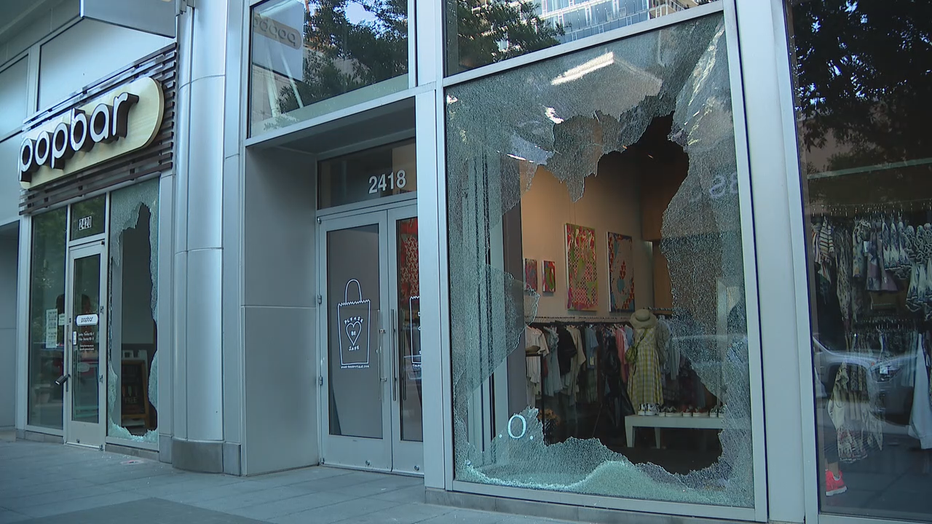 There was nothing those at the One stop Express in Uptown could do.

The looters entered the store just before 10 p.m., and stole whatever they could get their hands on. That included cash from the register.

“I mean, I know people are upset, but this is not the way to handle it,” the store’s owner, Trevor Arterbur, said.

Arterbur is left with the damage. He’s already replaced the windows that were smashed out with rocks.

At least one rioter is seen on surveillance video knocking over glass bottles of wine.

“My employees, they were really shaken up last night,” Arterbur said.

The crowd was in and out within minutes.

“Then they went on to Whole Foods, right and down the street, and tore that apart,” Arterbur said.

Whole Foods off McKinney in Uptown is feeling the damage.

The front windows were smashed out.

They weren’t the only ones with broken glass. Graffiti marks were also scattered across town.

“Oh my God. They are like tearing everything up,” Uptown resident Daren Martin said.

“Just basically hitting anything they could,” he recalled.

A local Tom Thumb was also damaged by vandals, along with restaurants, like Jimmy John’s, and a number of retail stores in Victory Park.

Martin said he understands why the protests started, but is asking, why is it coming to this?

“You know, Minneapolis was ridiculous. I’m enraged by it. It’s infuriating,” he said. “Tearing up our city as a response to that, I just don’t think is the right response.”

His shift ended just before Saturday’s looting. He said he wouldn’t wish this scene upon anyone. Still, he understands that people are angry.

“It’s not really about race. It’s about the system,” he said.

He believes the death of George Floyd was, for some, a tipping point. He doesn’t have any answers.

In the security footage of the looting at One Stop Express, it shows a man who the owner says is homeless.

He’s the one who might be in the most need out of anyone, but instead of joining in, he chose to walk away.

As for the ones who caused damage, the owner said he’s not going anywhere and he’ll work to protect his business from this happening again.

“I have plenty of help,” Arterbur said. “I’ll be here, holed up, waiting for anything to happen.”