It was a somber mood at St. Elizabeth Ann Seton Catholic Church as friends and family said their final goodbyes to Alex Cervantes.

KELLER, Texas - Funeral services were held in Keller on Saturday for a Euless police detective killed by a suspected drunk driver over Thanksgiving weekend.

It was a somber mood at St. Elizabeth Ann Seton Catholic Church as friends and family said their final goodbyes to Alex Cervantes.

"Alex Cervantes was special. He didn’t know it. People like him who are special never do," Euless Police Department Chief Mike Brown said. 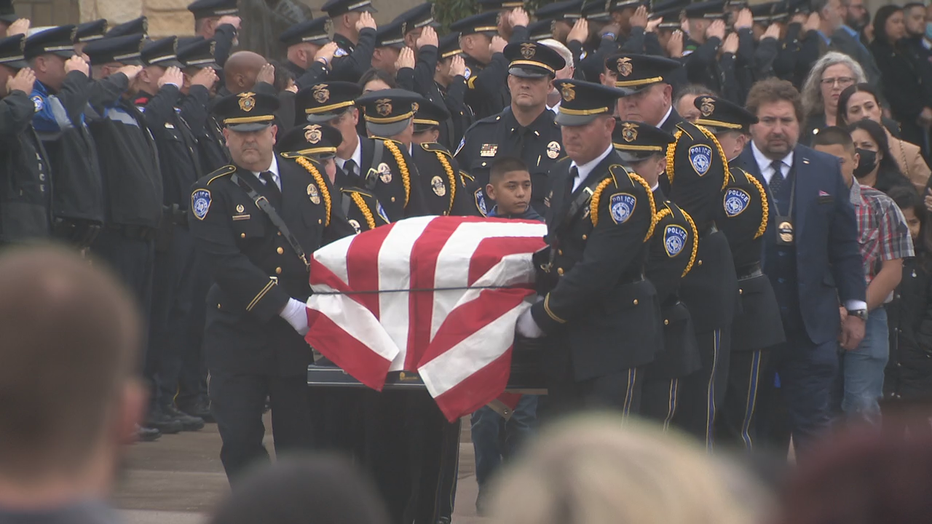 He was off-duty, traveling to buy Christmas decorations with his family back in late November, when Lake Worth police said Dylan Molina, a suspected drunken driver with a previous DWI arrest, ran a red light while speeding away from a minor crash and t-boned the Cervantes family. Alex was killed.

"He had a life plan and he was looking forward to the future," Brown said. "It’s a future that was interrupted."

His two boys were not seriously injured, while his wife, Priscilla, had multiple injuries and was sedated in a hospital for three weeks.

She doesn’t remember the accident. When she woke up, she was told what happened.

"I didn’t even know where I was at. I had no idea where my boys were. I had no idea about Alex," she said. "I think it was just hard for me to take in because I couldn’t imagine him not being here."

His family said their goodbyes Saturday, as did his police family.

"He just had a way of bringing the best in people around him," Brown said.

Alex’s burial will be in New Mexico on Monday.