Temperatures are tumbling across North Texas and some flakes are falling! FOX 4 meteorologist Evan Andrews walks you through the day and what you should expect from this system.

This week's arctic blast will be the coldest weather we have seen since the winter freeze of February 2021.

While the weather will be dangerously cold there are some key differences between what we expect to see this week and the storm that led to 246 deaths and left many without power for days. 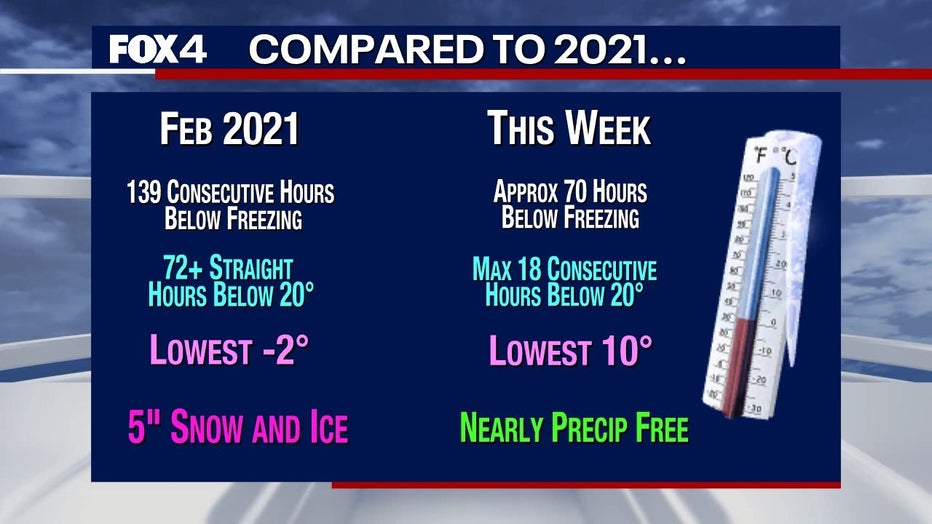 The main one is that there will be little to no precipitation.

This week's storm will be nearly precipitation free. There is a small chance that we could see some sleet on Thursday, but there is not supposed to be any snow or ice.

While temperatures will be cold it won't be quite as chilly this time around.

The lowest temperature we are expecting in the DFW area is 10 degrees, though the wind chill at times will dip below zero.

In Feb. 2021, the lowest temperature we saw was -2 degrees and the wind chill was even colder.

READ MORE: HOW TO PREVENT PIPES FROM FREEZING IN BITTERLY COLD TEMPERATURES

We will also be below freezing for a considerably shorter amount of time than in 2021.

Temperatures are expected to dip below freezing for about 70 hours from Thursday to Sunday.

In Feb. 2021 we spent 129 consecutive hours below freezing, including more than 72 hours below 20 degrees.

This time around temperatures will drop below 20 degrees for a maximum of 18 consecutive hours.

This time around ERCOT says it is prepared to handle the extra power demand on the grid.

In Feb. 2021, the grid failed leaving millions in the state without power for days. Federal energy regulators blamed the failure on frozen equipment at power plants and natural gas facilities.

Since then ERCOT has implemented policies that they say are aimed at preventing similar failures.

Some of those tools include weatherization of power equipment, bringing more generation online earlier if needed and purchasing more reserve power, according to the agency’s statement.

ERCOT expects the grid load to jump on Dec. 23 and remain high through the end of the weekend.