Southwest Airlines is trying to play catchup after a system-wide meltdown that began over Christmas weekend left thousands of passengers stranded at airports nationwide.

DALLAS - The once daunting pile of unclaimed bags has dwindled and the once hectic concourse at Dallas Love Field was much calmer on Thursday.

More than half of its flights were canceled again Thursday for Southwest Airlines, and getting luggage is like trying to win the lottery.

Southwest Airlines canceled more than 2,300 flights nationwide on Thursday, including nearly 200 at Love Field, but the Dallas-based airline is hopeful things will be back to normal on Friday.

There was barely a line at the Southwest Airlines customer service counter and the flights that weren't preemptively canceled by Southwest Thursday appeared to be running on time.

"The flight actually went very smoothly no issues or anything like that," said Southwest passenger Kashenna Clark.

Clark and her girlfriends flew in on Southwest from St. Louis for a celebration.

"Good, good, it's my birthday weekend too," said Verlanda Swinney.

They said they had no problems and their flight was half-full.

"We had space left. Everything went well. No issues, no hiccups, no nothing," said Sheila Swinney.

Sandeep Kherde and his family were on a plane Christmas Eve, ready to fly to California to visit Disneyland.

Before takeoff, their flight was cancelled.

"They don’t have any idea where the luggage is," he said.

A ruined vacation, and they still don’t have their bags full of presents.

"Expensive watches for gifts and things like that," Komal Kherde added.

David Ausema, along with his wife and four kids, had a flight cancelled from Grand Rapids, Michigan Thursday, but they drove to Chicago and flew to Dallas with no delay.

"Here we are in Dallas waiting for our bags," he said.

As their seventh and final checked bag arrived, there was a sense of relief.

Southwest Chief Commercial Officer Ryan Green gave a personal apology and gives information on how people can rebook flights, get refunds and get lost bags returned to them.

Southwest Airlines is trying to play catchup after a system-wide meltdown that began over Christmas weekend left thousands of passengers stranded at airports nationwide.

"Cancelled on Sunday, rebooked it for Tuesday," said Katie Lamar.

Lamar's sister ended up having to fly back to Sacramento on a different airline.

Her luggage is still in limbo.

"Her bag got stuck here, and it's been here ever since," said Denise Lamar. "We've been looking for it, and now we've been told it's in Sacramento."

The number of unclaimed bags that piled up at Love Field over the past several days has dwindled. Still, many Southwest Airlines customers are without their luggage.

FOX 4 crews spoke with some travelers, who even following Thursday flights, were waiting several hours for luggage.

And then there’s the Kherde family.

"Since we don’t have bags, we can’t do anything," Sandeep said.

Five days after a cancelled flight, they still don’t have their bags.

"How do we rely on the system? So, something needs to be done, this is something which we have never experienced and no one should," Komal added.

Southwest Airlines canceled more than 2,300 flights nationwide on Thursday, including nearly 200 at Love Field, but the Dallas-based airline is hopeful things will be back to normal on Friday.

More than one million passengers have been affected so far. In total, more than 13,000 Southwest flights have been cancelled.

Southwest acknowledged inadequate and outdated technology leaving flight crews out of position during freezing temperatures across the country last week.

The US Department of Transportation secretary Pete Buttigieg released a statement Thursday afternoon.

"I'm disappointed that Southwest has not done  more to proactively communicate with passengers the way they are going to take care of you," Buttigieg said.

He penned a letter to Southwest Airlines CEO Robert Jordan, calling the disruption "unacceptable," and listing priorities of getting passengers to their destinations, providing reimbursements for meals, hotels and ground transportation, refunding passengers who do not accept alternate booking and ensuring passengers are reunited with luggage.

Buttigieg says passengers are owed refunds if they plan not to rebook travel and compensation if you were forced to book on another airline.

The secretary also said you could also be compensated for ground travel and meals.

You can submit a complaint at the Department of Transportation website.

On Wednesday, North Texas Congressmen Colin Allred and Jake Ellzey took part in a Zoom call with the presidents of the three unions representing workers with Southwest Airlines. 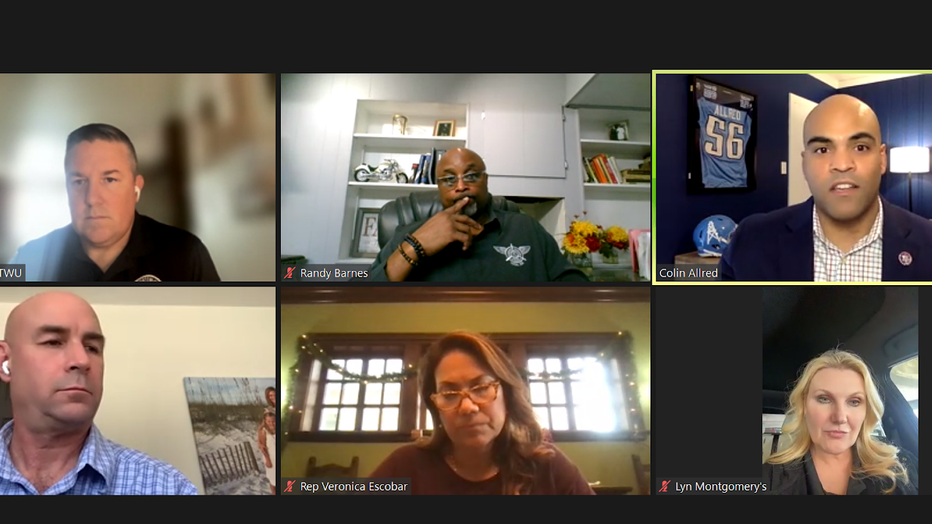 "There has always been strong bipartisan support in Congress for the growth of Southwest Airlines not just because it generates such a huge economic impact for our region, but also because of its storied history as the people’s airline and the legacy of Herb Kelleher.
"However, it is clear that for some time Southwest has run unacceptable risks and tried to get by with an unacceptably thin margin of error — both in staffing and in technology and that this crisis was both predictable and preventable.
"The payment of hundreds of millions in dividends to shareholders and a healthy profit through the first three quarters of this year clearly show that Southwest can afford to address the issues at hand but has chosen not to.
"While businesses should strive to maximize profits, it should never be at the expense of their customers. Through mismanagement, failed infrastructure and poor planning Southwest neglected the people who keep them in business. Leaving thousands of Americans stranded over the holiday season is unacceptable.
"Southwest must keep their promise to compensate the thousands of passengers who were impacted by this preventable crisis and to implement the necessary reforms to make sure this never happens again."

The rest of the Lamar family was able to fly back to Sacramento Thursday on their original flight out without any problem.

The Lamars and the group from St. Louis know they're some of the lucky ones.

Southwest Airlines says it will make every effort to reimburse affected passengers for what it calls "reasonable expenses."

Be sure to save your receipts to submit to the carrier.