North Texas leaders will now get a letter from the state&nbsp;informing them of some rollbacks of Gov.&nbsp;Abbott's phased reopenings.

DALLAS - After seven straight days of COVID-19 patients taking up more than 15% of available hospital beds in the North Texas region, businesses will be forced to further limit capacity or temporarily close down as reopening rollbacks take effect.

That 15% threshold, which equates to about 2,400 people in North Texas hospitals, is the threshold Governor Greg Abbott set in his emergency orders.

North Texas leaders will now get a letter from the state informing them of some rollbacks of Gov. Abbott's phased reopenings.

Elective surgeries will again be suspended. Restaurants, retail stores, and gyms must reduce capacity to 50%, and bars must close. 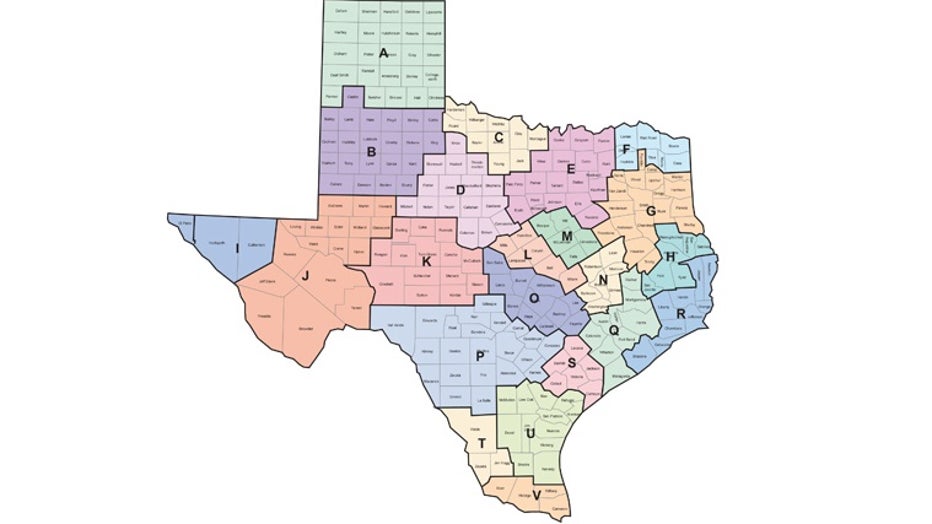 In Dallas County, Dallas Code Enforcement and Dallas Fire-Rescue are preparing for the rollbacks by increasing patrols starting Friday.

Dallas city officials said the majority of businesses are complying with the orders, with those in violation are only exceeding capacity by less than 10 additional people.

These state-imposed restriction rollbacks will now last until the hospitalization rate in North Texas falls below 15% for seven consecutive days.

As of Thursday, more than 15.6% of the patients hospitalized in our 19-county region are coronavirus patients.

The reopening rollbacks comes down to hospital bed capacity.

“There are some [hospitals] that can expand bed capacity. There are others that really can’t because they don’t have the staff to staff them. And there are some in some of the rural areas that are already full,” explained Steve Love, CEO/President of the DFW Hospital Council.

Love said some area hospitals are working on adding capacity. Others only have a bit of wiggle room.

“Our staff is stretched. We’ve got people working double shifts,” he said. “Do they have the ability to surge and add more beds on their existing campus? Yes, but again, you’ve got to have the staff to staff those beds.”

The order also maintains that hospitals must suspend elective surgeries, but Love said those surgeries can be done off-campus.

“Many have surgery centers, they have outpatient locations, etc.,” he explained.

“We are hearing from all the hospital systems that they have either exceeded the highest levels they've seen or very close,” said Dallas County Health Director Dr. Philip Huang. 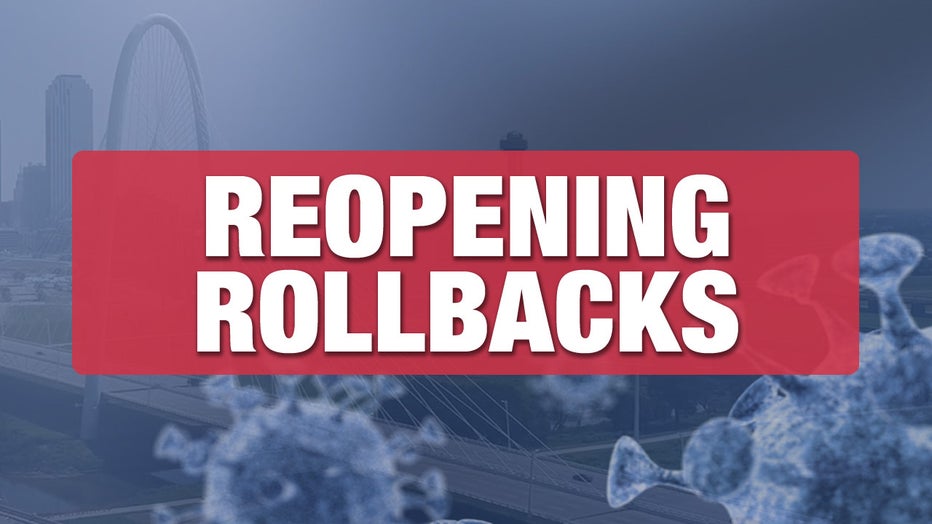 As the rapid coronavirus surge continues, hospitals are asking the state for help.

JPS Hospital in Fort Worth said that in the next two weeks, the state will send about 45 nurses. About 15 of them are ICU nurses.

Parkland Hospital in Dallas currently has 189 temporary workers, and 15 were sent from the state. That consists of nurses and other staff working in hospitals, jails and testing sites. Another 102 are traveling nurses from an agency.

Texas Health and Human Services will send a letter to county judges notifying them of the action plan.

While the rollbacks are supposed to be automatic, there is some confusion among Tarrant County leaders about exactly when they officially kick in or when they’ll be enforced.

“So that has now happened, and it will now be up to the individual cities as well as the TABC to begin the enforcement of the governor’s order in whatever way they choose to do that,” said Tarrant County Judge Glen Whitley.

But while the rollbacks are supposed to be automatic, there is some confusion among Tarrant County leaders about exactly when they officially kick in or when they’ll be enforced.

“I’m assuming that probably won’t occur right now or immediately, but it will probably go into effect sometime tomorrow,” Whitley said. “But that is one of the things that is unclear in the governor’s order as to once that trigger is hit. At what point does it become effective.”

One of the rollbacks includes canceling elective surgeries.

Cook Children’s Medical Center on Thursday tweeted that it’s elective surgeries are not canceled, saying it has the hospital capacity and staff to continue them and the governor’s orders allow for certain exemptions.

“We’re not too far away from Christmas, so we need to be careful,” Whitley said. “Do those things that you think are necessary to protect your family and be conscious when you are out. Be conscious of the folks that you're around.”

The rollback order coincides with the National Finals Rodeo kicking off at Globe Life Field in Arlington on Thursday, along with several events in Downtown Fort Worth and the Stockyards.

Billy Bob’s in the Stockyards has scheduled watch parties and nightly concerts over the next nine days.

The business reopened in August after getting permission to operate as a restaurant. It’s remained a popular concert venue over the weeks and one of the few that are truly operating right now.

“We’ve got a lot of protocols in place that allows us to be safe and feel like we’re doing it the right way and we’ve got a lot of people coming into town that are from out of our region,” the general manager said.

Travis says there are temperature checks for staff, guests and artists. Masks are required when they’re not at their table.

“People have done a great job. People have been very receptive,” he said. “There’s been two or three that you gotta throw out because they refuse to be a part of the rules.”

Billy Bobs will host nightly concerts at 10 for next week and a half. Some of those are already sold out with the reduced number of seats available.

And while it's still six months away, Travis is hoping these rollbacks don't affect the 40th anniversary of Billy Bob’s he's planning right now for April.

It's typically one of the busiest nights of the season in Grapevine. But this year, rollbacks are what’s on the minds of many business owners trying to survive.

“We wouldn’t be able to have this conversation standing here on the sidewalk if it were normal because the sidewalks would be just packed,” said Stephanie Reed, who runs Farina’s Winery and Cafe

It’s normally a packed crowd. But this year, it’s a reverse parade, where spectators drive-thru to see stationary floats. It’s scaled back, in an effort to minimize crowds during the pandemic.

“It’s a roller coaster, I think for everybody,” Reed added.

“I don’t want to see anybody lose their business over this,” she said.

“They have essentially had their business closed for half this year, if not more,” said Jon Powell, who runs Hop and Sting Brewing Co. “It’s going to be very, very, very, very tough to get back on your feet.”

Hop and Sting Brewing Company is one of 2,800 bars across the state the TABC said have been allowed to reclassify as a restaurant in order to stay open. Still, Powell feels bars have been dealt an unfair hand.

Not all bars have that opportunity.

“For us to be singled out just because we make more money off of alcohol than other establishments really doesn’t make a lot of sense,” Powell added.

The holiday season is different in 2020, and rollbacks are another hit to businesses counting on holiday earnings.

“We all started decorating a little early just because 2020 has not been our favorite year,” Reed said. “So we’re trying to have the last couple of months be as happy as we can make them.”

For the tighter restrictions to rollback, the virus hospital capacity must be under 15% for seven consecutive days.