Outgoing superintendents from three of North Texas' largest school districts all agreed that critical race theory is nothing more than a distraction and said it isn't taught in schools. "This is a manufactured crisis. This is not real."

DALLAS - One admits he’s thinking about running for mayor, another wants to make a career change and one is just tired of the politics.

Those are the reasons the superintendents from three North Texas’ largest school districts are leaving their jobs.

They discussed the challenges of the pandemic, culture wars that have taken over school board meetings and the role of Texas lawmakers in education.

All agreed that the idea of critical race theory is no more than a distraction.

"This is a manufactured crisis. This is not real. This is a national playbook by some very smart, organized people who pay people to go out and create havoc," Hinojosa said.

All three speakers said the topic was never taught at Dallas ISD, Fort Worth ISD or Richardson ISD.

"There definitely is something that is critical race theory. It's not taught in schools," Stone said. "That was the narrative that was crafted last summer, and it caught on like wildfire. I've never seen anything like it." 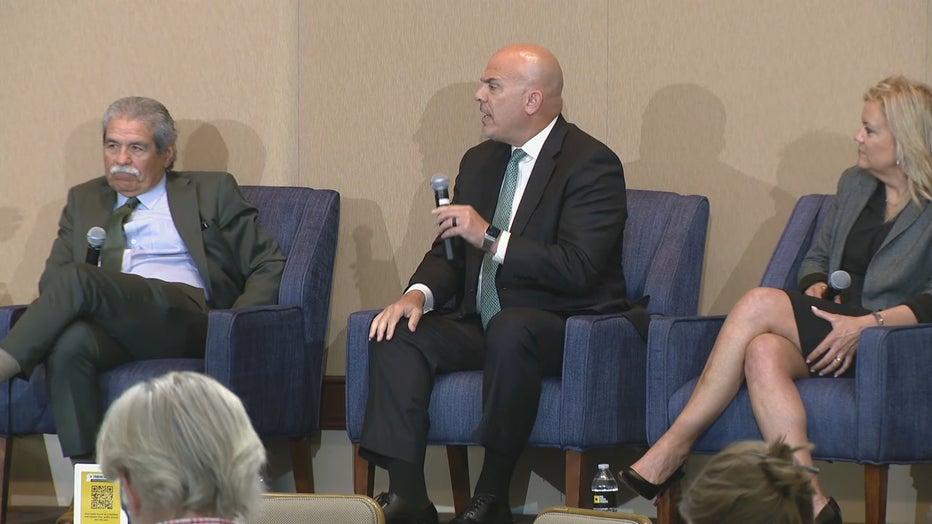 "I don't think you need to inject truth serum into legislators," Scribner said. "I think you just need to a conversation with them individually behind closed doors. And they understand this is a manufactured crisis."

In the midst of a mass exodus of superintendents across the metroplex, districts across Texas are also dealing with steep learning declines, upcoming STARR testing, dropping enrollment and with IT-funding losses.

Dallas ISD reported a drop of about 6,000 students over the last two years, while Richardson ISD is 1,000 students short of where they were before the pandemic.

Districts say younger grades are seeing the biggest decline, such as pre-K.

"You have this many kids, and we have fixed costs," Hinojosa said. "We lose kids. We still have to pay a teacher for the whole year."

The guest speakers also addressed the subject of books deemed inappropriate in schools after Republican State Rep Matt Krause sent districts a list of 850 titles that he said might violate a new state law on teaching "currently controversial issues."

In response, Granbury ISD temporarily pulled 130 books in January. Many of them had LGBTQ characters or themes. A review committee later banned three of those books permanently and agreed to return the others to the shelves.

Texas Tribune: Why so many superintendents are leaving

Three outgoing superintendents from major North Texas school districts got the chance to sound off on the pandemic, learning loss and political pressures. They talked to the Texas Tribune about the problems of the schools they are leaving.

"Most Americans believe censorship is not appropriate. We believe in free press. We believe in people’s rights to have access to information," Hinojosa said.

Last fall, Gov. Greg Abbott called on schools to protect children from pornography and other inappropriate content in certain books.

Dallas ISD left the decision up to its library team to look over book titles and remove anything inappropriate. Hinojosa says just one book was removed.

Stone says they dealt with inappropriate books on a case by case basis, but the problem is not widespread.

"To challenge or to think in any way that pornography is in our schools is just absurd. If that were the case, you would have stories in every newspaper," she said.

On the topic of learning loss, the Fort Worth ISD superintendent said it took students displaced by Hurricane Katrina three or four years to catch up. The district is receiving over $260 million in ESSER.

Hinojosa admitted he is considering a run for mayor of Dallas.

Scribner retires in two years and Stone left her job in Richardson in December.