Temperatures will stay in the low teens during the day Monday and wind chills are below zero across North Texas.

A wind chill warning and hard freeze warning remain in effect for counties until noon Tuesday.

Wind chills on Monday afternoon were below zero across North Texas, in the negative single digits and negative teens.

Monday night will see partly cloudy conditions with lows in the low single digits and the potential for some parts of the region to hit zero degrees. Winds will ease slightly, but still be from the north at five to 10 MPH.

When people wake up Tuesday morning, temperatures across the region will be at zero degrees, or slighly above or below.

The day will start mostly sunny but then turn cloudy ahead of another round of snow and freezing rain. The forecast is for it to be slightly warmer than Monday, with temperatures getting into the lower 20s.

A Winter Storm Warning will go into effect Tuesday night as snowfall could begin in parts of North Texas. That could be a potential mix of freezing rain, snow and sleet after midnight depending on what part of the area one lives in. 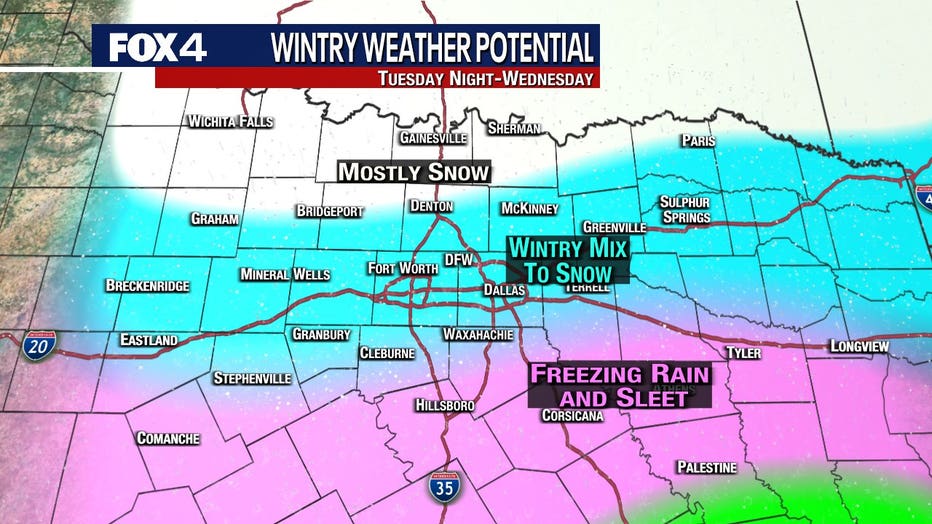 Thursday will start cloudy then clear out, with sun and highs in the upper 20s. Friday is likely the day North Texas climbs above freezing for the first time in nearly a week.