North Texans have last-minute fun in the snow, venture out for food

The brief Friday afternoon sunshine gave many North Texans the courage to venture out.

FRISCO, Texas - The brief Friday afternoon sunshine gave many North Texans the courage to venture out.

But before that, some took advantage of the final few hours of slippery streets to have some fun.

Many in Frisco decided not to let the ice stand in their way any longer.

"Boys were bored sitting around the house and asked if they could go sledding," said Randy Burner. "So we looked around to see what we had had a shovel and a rope and we just tied it to the back of the Tahoe and took off." 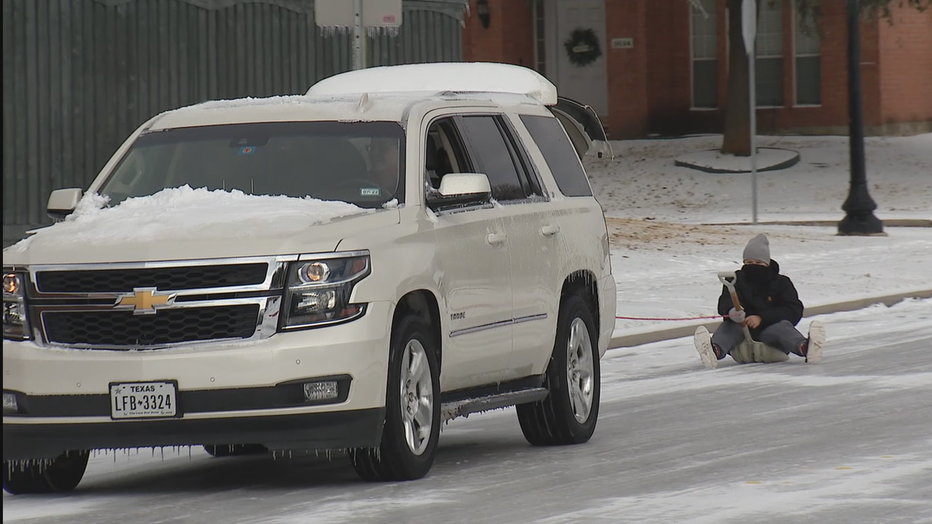 When will the ice melt? Hard freeze warning overnight for North Texas

Burner says it's a trick he learned growing up in Oklahoma City.

"Everybody’s going pretty slow. Everyone is watching out for each other. Waving when to start and stop," he said.

Others worked to shovel their way out ahead of the sun.

"We are locked in. I did not put the car out front, so we have to wait until it melts to open the gate and get out," said Jason Wizer. "We watched a lot of family movies, board games. We have a few hours where it will be melting so we are going to try to help it."

The grocery stores bustled with shoppers who were eager to get some fresh air and fresh ingredients.

Tabitha Barnes says the stores still had plenty on the shelves.

"I was craving chili took me 30 minutes to defrost my car. It was worth it," she said. "They don't have the beef chunks like I wanted, but they were pretty stocked up."

As the ice begins to thaw, it’s relief for many.

"This time, I was more prepared. Had wood and candles, but we didn't need them," Barnes said. "I hope I don't need them any time soon."

There are still a lot of wet spots on the roads that will all refreeze Friday night, so drivers still need to be cautious tonight and tomorrow morning.