DART says it stands by its decision to cut all services two weeks ago and rail service Wednesday for safety. But unlike two weeks ago, the regional transit system is hoping to keep buses operating this time around.

DALLAS - For the second time this month, DART is cutting service due to the winter weather.

But unlike two weeks ago, the regional transit system is hoping to keep buses operating this time around.

DART says it will continue to run at a limited capacity on Thursday as well.

DART says it stands by its decision to cut all services two weeks ago and rail service Wednesday for safety.

PREVIOUS: DART suspends all services due to icy conditions

Victor Sorsson is from Melbourne, Australia, where they only have to shut rail service down when it gets too hot. 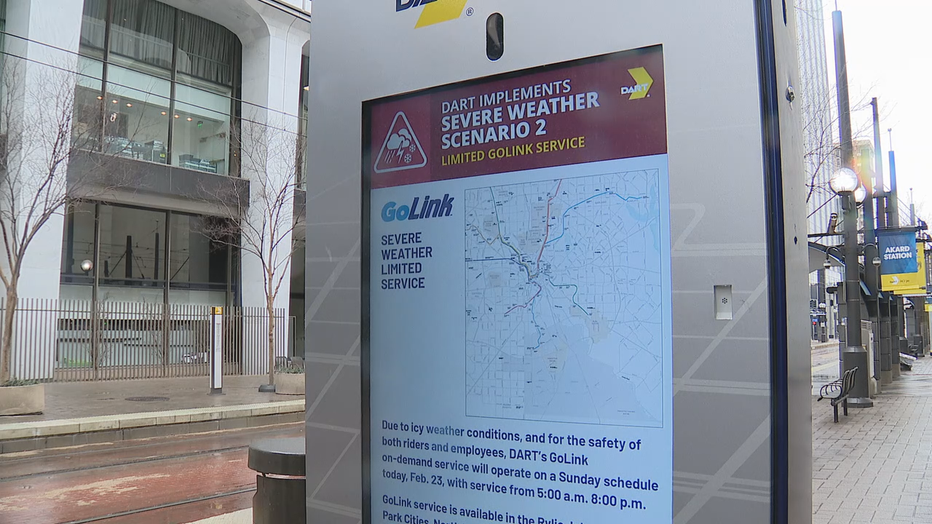 "It’s a little frustrating as a tourist," he said. "Just going to the Holocaust Museum downtown, it’s only like two stops. So I can walk, but I’d like to catch the train."

"So I am trying to go the VA but just spent $1.50 on a ticket. That is no good," said DART rider William Burns.

He said he wished DART's ticket machine would have warned him before he paid his fare to go to the VA.

"I started not to go today but thought if you don’t go it will be another thousand years before they give you another appointment," Burns said.

DART is working to direct riders to buses.

DART spokesperson Gordon Shattles said the decision to shut down rail is one they did not take lightly.

"If the rails are frozen and can’t get traction, we have to weigh that with need for riders and their safety," he said.

Shattles said DART made the call early so people could make plans. The focus now is to keep buses running.

"It’s very different for us having DART make decisions so early," he said. "The DART system decades ago the decisions were made not to put in the upgrades necessary to deal with things like ice, freezing rail, the wires. They just don’t own the proper tools."

Narvaez says he does believe DART waited too long to get service back earlier this month stretching into the weekend.

"The one thing I wish could’ve changed at two weeks ago is when the weather report said that the weather would be nice Saturday and Sunday that DART could’ve gotten the transit going again as quickly as possible," he said.

DART's new president will be briefing the city council on its winter decision-making process next Wednesday.