Airlines are already canceling hundreds of flights at DFW Airport and Love Field because of expected winter weather in the Dallas area.

DALLAS - American and Southwest Airlines moved to cancel flights ahead of the winter storm in North Texas.

American Airlines said it went ahead and canceled hundreds of flights to give people time to make other plans.

Most of the cancellations at DFW are from the Fort Worth-based carrier and its regional airlines. 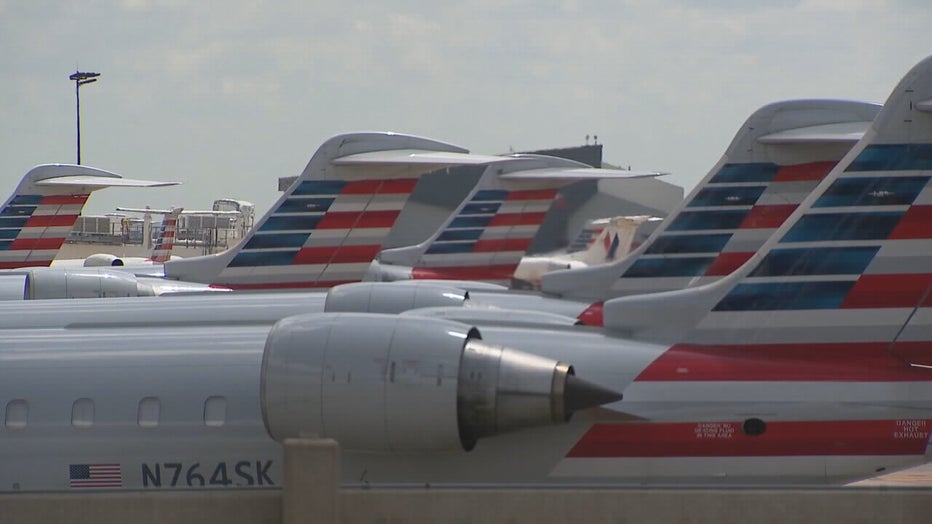 FlightAware reported 634 cancellations for Wednesday or about 33%. Nearly 500 flights are canceled for Thursday.

At least one traveler that FOX 4 spoke to Wednesday morning said he was hopeful that he'd make it out for a business trip to San Francisco.

"I had a later flight this morning, but I got the cancelation last night. I didn't want to get stuck. I gotta get back. I have meetings for work. So I called, sta on hold for a long time. They called me back about an hour and a half later and got me on an earlier flight," said Andrew Hayes-Stoker, a traveler at DFW Airport. "I feel good as long as I get out of her right now. If not, it looks like I might be stuck in Dallas for a couple more days at least… at least through Friday."

So far, 85 flights have been canceled into or out of Dallas Love Field. That’s about 16% of the schedule.

Both airports said they have crews ready to treat runways and roads, as well as deice planes if necessary.

They are reminding travelers to check for cancellations or delays before coming to the airport.

People who normally take DART light rail will find it is not running Wednesday due to the icy weather.

For the second time in its nearly 40-year history, Dallas Area Rapid Transit is shutting down rail service for weather conditions.

DART did the same thing earlier this month during a winter storm.

DART officials said rail service is suspended for Wednesday and buses will operate on a Sunday reduced schedule.

"It’s an inconvenience because we rely on the train and buses," said DART rider Donna Garrett. "I can catch the bus to go downtown, but I need to go to DFW in Irving.

DART said shuttles will be available to pick people up from stations, but getting around is going to take much longer.

The transpiration agency said it learned a lesson from the freeze a few weeks ago.

"Two weeks ago we had over 150 buses stranded throughout our 700-mile network," said Gordon Shattles, a DART spokesman. "Having learned from that after our after action report, we wanted to be able to provide as much flexibility as we can."

"For people like me who have lived in different climates where weather is more severe, it's not about what we know but about looking out for other drivers," said Arine Anderson, who now lives in North Texas.

Plans for Thursday, when the worst of the weather is expected, are still undecided.