A Dallas County jury sentenced a man to 55 years in prison for his role in the kidnapping and murder of a 13-year-old Dallas girl.

DALLAS - The man convicted of masterminding the kidnapping and murder of 13-year-old Shavon Randle testified during his sentencing Wednesday, before being sentenced to 55 years in prison.

During his testimony, Darius Fields denied any involvement in the deaths of Shavon Randle and a man he described as a little brother, Michael Titus.

Fields was convicted of organized crime, prosecutors called it retaliation over stolen drugs Randle had nothing to do with.

For the first time, jurors heard from Fields himself, as he told his side of the story.

Going against his attorney’s advice, Fields testified for almost two hours, answering questions on his criminal history, the robbery that supposedly started it all, and his whereabouts when Randle was kidnapped, insisting he was not involved.

Fields was immediately in tears when asked about his upbringing and father.

"He spent most of my life in prison, he got out right after I got out of prison in 2015," Fields said.

Prosecutors convinced the jury Fields ordered Randle’s kidnapping and murder with the help of three associates.

But Fields denied even knowing one of them - Desmond Jones, who was convicted in 2020 - and denied any involvement at all in the crime, even saying he tried to help police find Randle by allowing them to search his phone.

[DEFENSE ATTORNEY: "Did you encourage anybody or direct anybody or do anything whatsoever to cause her death?"]

"No sir, I ask myself that a lot. Because I think maybe if I wasn’t selling weed, maybe none of this probably would have happened. I beat myself up a lot about that," Fields said. 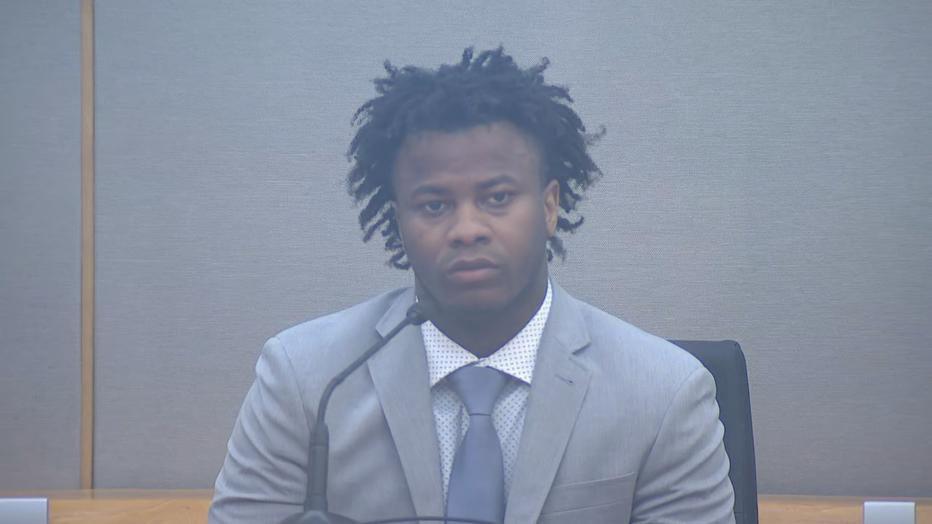 Both Randle and Titus were found shot to death inside an abandoned Dallas drug house.

But Fields claimed that, during the girl’s kidnapping, he was at home sleeping.

[ATTORNEY: "What about the death of Mike Titus? Did you have anything to do with that?"]

"I loved him like a brother, if I could’ve saved him or Shavon, I would have," Fields said.

During trial, prosecutors said Fields had motive to order the kidnapping of the 13-year-old girl in retaliation for stolen marijuana she had nothing to do with. Surveillance video and cell phone data showed the group planning the crime and conducting surveillance on Randle’s home and a relative’s workplace.

The prosecution’s cell phone evidence showed Fields’ phone communicating with others involved in the kidnapping up to and during the abduction.

There were several moments during Fields’ testimony where he claimed to be forgetful on dates and details.

[PROSECUTING ATTORNEY: "Are you telling the jury you didn’t know the password to that 8658 phone?"]

"You’re trying to trip me, and I’m just asking can I get it right so I can give y’all the story. I don’t know the numbers. I haven’t used those numbers in over five years," Fields said.

The man convicted of masterminding the kidnapping and murder of 13-year-old Shavon Randle testified during his sentencing Wednesday, before being sentenced to 55 years in prison.

Prosecutors said this was an act by Fields.

"He began by crying to play on every one of your sympathies," prosecutor Jen Falk said of Fields. "He is a manipulator, period, end of story."

"I shouldn’t have to go visit Lincoln memorial to see my child," she said. "My child should be with me."

Anthony Farmer is a criminal defense attorney not associated with the case. He says it’s very rare for a defendant to take the stand in the punishment phase.

"I think sometimes defendants can think that them saying their peace and telling their story can help," he said. "But as lawyers we know through our experience that may not always be the case because there are surrounding circumstances, such as your criminal history, you can’t contrite in front of a jury, you can’t be apologetic.

Field's attorney, Scottie Allen, says they respect the jury’s decision but will appeal.

"I don’t think the evidence ever proved that he ordered, directed or instructed to kill anybody," he said. "If the jury felt he had, that verdict would have been a lot more stiffer than it is."

Fields was already serving 18 years for a weapons charge in Randle's death.

On the organized crime charge, he could have faced 15 years to life in prison, and prosecutors asked the jury to sentence him to life.