Jurors got a look inside the abandoned drug house where 13-year-old Shavon Randle was found murdered in 2017.

DALLAS - Jurors got a look inside the abandoned drug house where 13-year-old Shavon Randle was found murdered in 2017.

Darius Fields is on trial for organized criminal activity related to the girl’s kidnapping. Prosecutors say he planned the kidnapping with three others in retaliation over stolen drugs.

On Friday, prosecutors showed several pieces of physical evidence in this case, bringing several boxes of it into the courtroom as they try to link Fields to Randle’s kidnapping.

Boxes of evidence in the Randle kidnapping covered multiple tables and the courtroom floor Friday.

Investigators conducted two searches at the house where Randle and Michael Titus were found, along with multiple suspect vehicles.

Authorities carefully walked jurors through what was found inside the white Ford 500 believed to be used in Randle’s kidnapping, including latex gloves, a notebook belonging to Titus, and other items.

[PROSECUTOR: "What is this blue thing appear to be?"]

"It appears to be an Ethernet cord," responded Jennifer Briggemen, who is a supervisory special agent for the Dallas FBI office.

[PROSECUTOR: "And then the white thing here that’s kind of wrapped up in a circle?"]

"I believe it was zip ties," Briggemen said.

Prosecutors said similar items were used to bind Randle, who was an innocent target of retaliation who was shot to death.

Fields, along with LaQuan Wilkerson, Desmond Jones, and Devontae Owen, were all charged with her kidnapping, but no one was ever charged with murder. 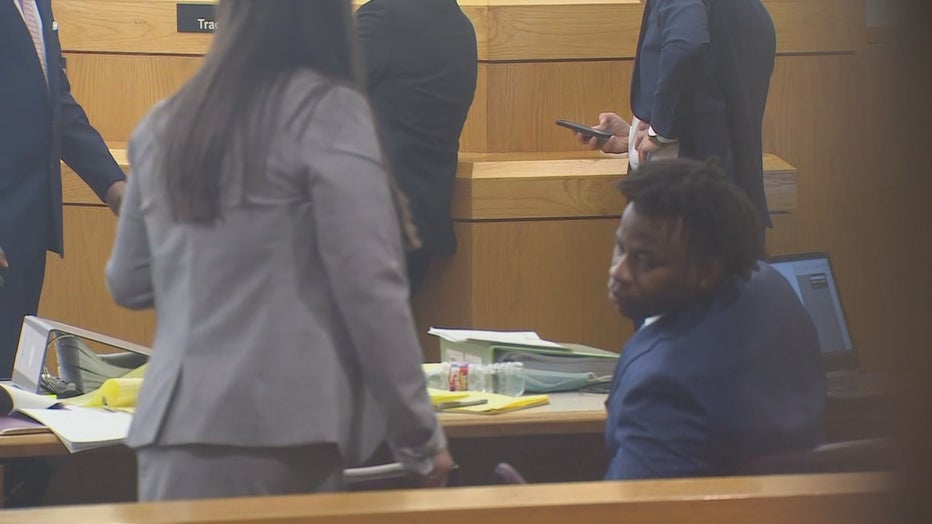 Prosecutors also showed the jury bleach footprints found in Wilkerson’s black Lexus after he turned himself into police.

[PROSECUTOR: "Is it possible, based off your own experience, that came from bleach?"]

[PROSECUTOR: "And what was it that was in a container in the driver side rear floorboard?"]

"It was a Clorox bleach bottle," Briggemen said.

[PROSECUTOR: "At some point, when you’re pressing a scene, was there also bleach there?"]

That address on Kiest is where the bodies of Randle and Titus were found.

Jurors also got a look inside that abandoned home.

Titus was found shot in the head with latex gloves on his hands and a gun near his right hand.

Cartridge casings, bindings with blood on them, and bleached clothing and rags were inside the home.

Prosecutors asked family members to leave the courtroom before showing the jury graphic photos of Randle when she was found.

Coming up, jurors will also hear from more of Randle’s relatives, who will testify, along with DNA and firearms experts.