4 arrested for murder of Mesquite 16-year-old

Mesquite police arrested four people connected to the murder of a 16-year-old boy last month. They allegedly conspired to rob him during a gun sale and ended up shooting him in the chest.

Keymydre Palmer Anderson's body was found in the middle of Clay Mathis Road on Jan. 23.

Witnesses told police they saw him fall from the window of a car that didn’t stop. He was wearing only a t-shirt and underwear at the time.

Investigators now believe Anderson’s death was the result of a failed robbery attempt. His pants were apparently torn from his body as his body was dumped from the car.

According to an arrest warrant affidavit, detectives looked at Anderson's cellphone and social media history. They obtained the data from several Instagram and TikTok accounts and found evidence that 19-year-old Jonathan Pyle of Dallas and 18-year-old Simon Guillen of Wilmer conspired to rob Anderson. 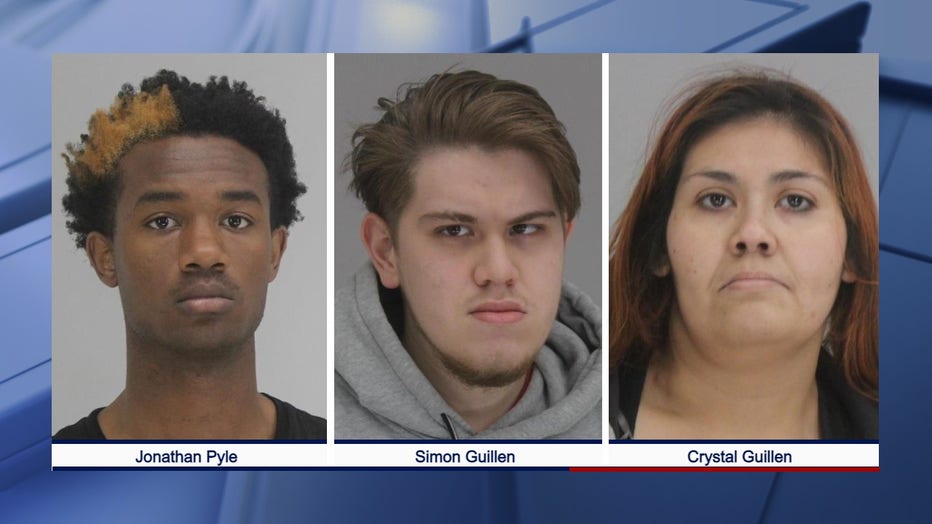 Simon’s mother, 34-year-old Crystal Guillen, and a 15-year-old male suspect were also arrested. Police haven’t yet said how they are connected to the case.

Grandmother Tonya Palmer was shocked at learning about the arrests in connection to her grandson’s murder.

"That’s not a parent. A parent wouldn't do things like that. That’s called a madman, not a mother," she said. "Going around doing criminal activity with your child. You're supposed to be a role model to your kids, your son."

"Unfortunately, in this day and age, nothing surprises me anymore," said Mesquite Capt. Stephen Biggs. "Our victim had been in communication with one or more of the suspects in regards to purchasing a firearm."

Anderson had contacted them about buying a gun and agreed to meet them outside his house on the night he was murdered, the affidavit states.

"I don't know why my grandson was buying a weapon. He wasn't in danger or any kind or harm or anything like that. Not that we know of," Palmer said.

Police say the 26-year-old had money from his fast food restaurant after-school job.

"When they agreed to meet up, the suspects attempted a robbery of the individual, and our victim was shot during the course of that robbery," Biggs said.

Teddy bears and flowers mark the 2800 block of Mesquite’s Clay Mathis Road where witnesses say the teen was tossed out of a moving car.

"Right over here in our parking lot, we have a safe exchange zone," Biggs said. "Many police departments have an exchange zone pull up in the parking lot. They're audio and video recorded. Bad guys may be less likely to want to meet you there."

Anderson was killed for $250 he had on him. His family is relieved at the arrests but not released from their grief.

"To take his life like that, it’s not gonna bring him back. Not at all," Palmer said. "We suffer every day."

All four suspects are facing charges for capital murder.

The juvenile’s name and mugshot weren’t released because of his age.