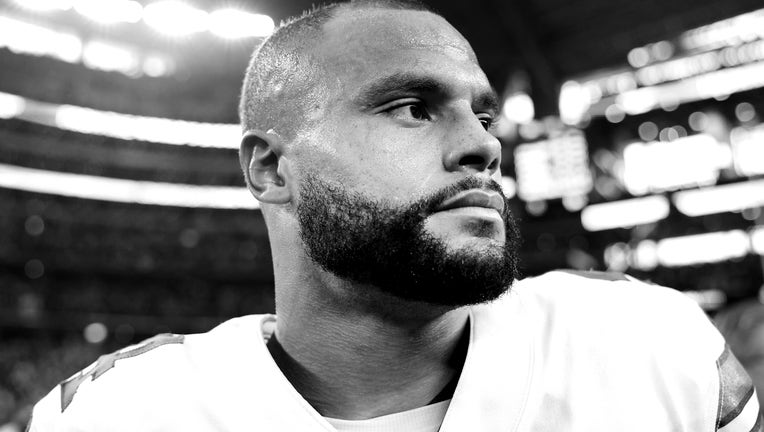 ARLINGTON, TEXAS - DECEMBER 11: (EDITORS NOTE - This image has been converted to black and white) Dak Prescott #4 of the Dallas Cowboys reacts after a game against the Houston Texans at AT&amp;T Stadium on December 11, 2022 in Arlington, Texas. (

DALLAS - Cowboys quarterback Dak Prescott is not shying away from criticism about his high number of turnovers.

Prescott has thrown nine interceptions in eight games this season.

"Are you concerned with the amount of interceptions that he's thrown lately? Or do you like the aggressiveness?" the radio host asked.

"What if I said yes, okay? Period," Jones replied.

"The definition of aggressiveness doesn't have to include turnovers," the host said.

Prescott said some of the interceptions were the result of bad luck, but he agreed that he needs to make some improvements.

"I’m gonna continue to stay aggressive. It’s just a balance, fine line of a balance that I’ve got to get to. And one way or another, I’ve got to stop throwing interceptions, whether they’re picked, deflected, whatever," he said.

"Any pro goes through a time in their career where things might get tough," said running back Ezekiel Elliott. "You just gotta keep swinging, going, do whatever you can to get confidence back. Even with the interceptions, you look at Dak. When it’s mattered, he’s stepped up."

Prescott should have another target to throw to this week.

He’s practiced the last two days without any issues.