DALLAS - A current and former Dallas police officer are charged with using excessive force during the George Floyd protests in 2020.

The officers are accused of injuring protesters with less-than-lethal forms of ammunition.

During the many days and nights of George Floyd protests in summer 2020, some turned violent and led to riots.

Dallas businesses were damaged and looted. The city of Dallas issued a curfew. The mayor declared a local state of disaster. 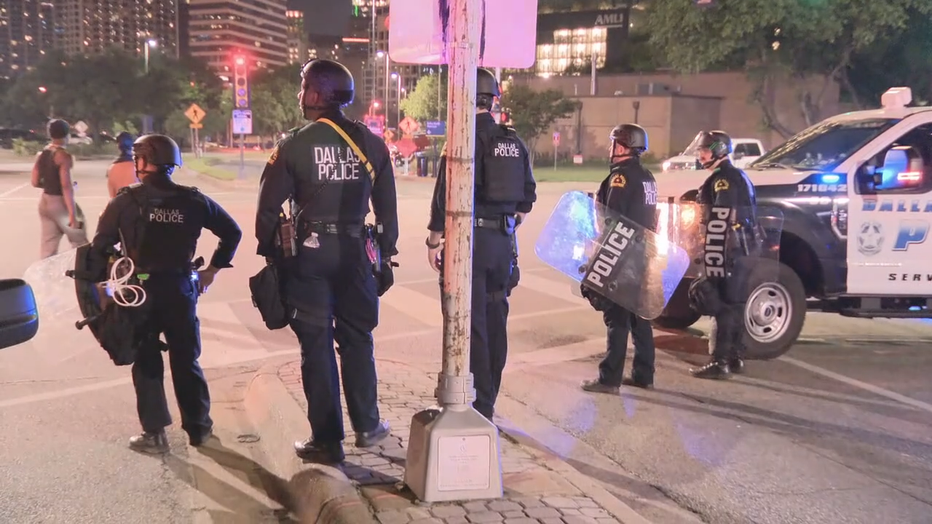 The governor met with DFW mayors and the National Guard and DPS Troopers were deployed to help local law enforcement.

Now, Ceuzot issued warrants for Mabry and Williams. Each is charged with multiple counts of aggravated assault with a deadly weapon and official oppression.

He is referring to the two-year period in which these charges need to be filed. He supports the decision.

"We have to work on the culture of the Dallas Police Department," Enobakhare Jr. said. "Their job is not to use their official capacity to prevent people from exercising their right."

Pete Schulte is a former North Texas police officer, turned prosecutor and is now a criminal defense attorney. He says it might be difficult to prove crimes were committed.

Corporal Mabry is charged with three counts of aggravated assault with a deadly weapon and official oppression. In each case, the DA’s office says he used a 40-millimeter launcher.

One shot hit Brandon Saenz. He lost an eye. However, a 40-millimeter is categorized as ‘less-lethal ammunition.’

"So it’s one of those cases that to get a conviction on that, you’ve got to have the evidence to know that that officer went out there with the intent to hurt somebody or do something bad in clear violation of their civil rights," he said.

Former Corporal Williams is charged with two counts of aggravated assault and four counts of officer oppression. He was fired from DPF after he seen punching a man in Deep Ellum last July. That criminal investigation is ongoing.

The DA’s office called a press conference last month asking for the public’s help identifying potential victims, knowing the statute of limitations is near.

"We need to call it what it was. It was a full-blown riot," he said. "Those officers that were out there need to be supported."

"I’m glad that we’re finally seeing some sort of progress," Enobakhare Jr. said. "People really did not have hope that there would be any level of accountability regards to what happened with the George Floyd protests."

The Dallas Police Association did not release a statement Wednesday but says it plans to do so in the near future.

FOX 4 reached out to attorneys for both the officer and former officer charged. The one representing Corporal Mabry believes the officers out there were in their legal right and says it was not a peaceful protest. He says the evidence will show officers used less than lethal force.

Dallas County DA seeks photos, videos of 3 encounters between DPD, protesters back in May