Dallas County DA seeks photos, videos of 3 encounters between DPD, protesters back in May

The district attorney is investigating whether certain officers should face criminal charges for how they handled protest response.

DALLAS - The Dallas County district attorney wants photos or videos of the May protests that happened in Dallas after the in-custody death of George Floyd in Minnesota.

The DA is investigating whether certain officers should face criminal charges for how they handled protest response.

The district attorney said that any witnesses who come forward are not in any trouble and won't have any charges filed against them.

He added that these investigations have stalled, which is why he's asking for the public's help.

Dallas County DA John Cruezot made a plea to the public Thursday.

He's looking for people who may have photographed or recorded three violent encounters between DPD officers and protesters in Downtown Dallas on May 30.

“We want to see [the encounters] from the firing, all the way to contact with the individuals,” Cruezot said. “What we're asking them to do is let us know they have the information.” 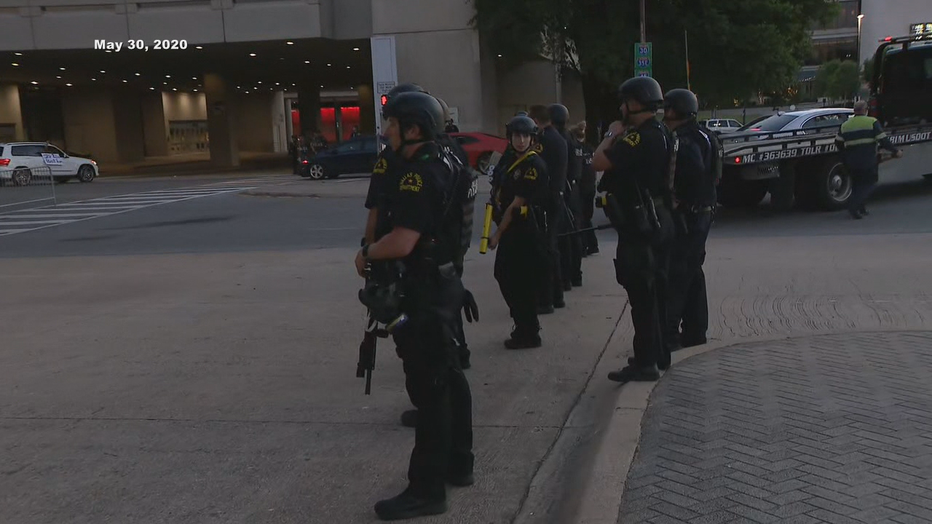 RELATED: Man hit by projectile during Dallas protest speaks out after losing sight in eye

He lost an eye after being struck in the face by a projectile. His attorney said witnesses saw an unknown officer firing the less-than-lethal object at Saenz near the Dallas Public Library.

The second incident happened later that same day involving Sgt. Roger Rudloff and a woman he allegedly shot with a "pepperball" launcher near the entrance ramp to 35E, north of Commerce Street.

In September, the Dallas Police Department said Sgt. Rudloff was placed on "restricted duty" pending outcome of an internal investigation.

The third incident involved 21-year-old Vincent Doyle. His left jaw was shattered after being shot in the face by a projectile in a parking lot near Pacific and Griffin at about 10:40 p.m. that night.

“We don't know if these are crimes. We're investigating them, they're potentially crimes. We want to be certain,” Cruezot explained.

That injunction was recently extended to November 16.

“Everybody has a right to protest,” he said. “I think it's reasonable for him to ask. I don't have a problem with that.”

But he added, “I would hope he would extend it beyond the point from where the officers fired. I think you need to show what happened prior to that, which also led to the officer using that type of tool.”

The DA said he's still waiting for DPD to turn over its case on Sgt. Rudloff.

FOX 4 contacted Dallas PD for comment, but have yet to hear back.