The Fair Park COVID-19 vaccination site re-opened Wednesday at noon as a drive-thru only location after two disastrous days with long lines.

DALLAS - The Fair Park COVID-19 vaccination site re-opened Wednesday at noon as a drive-thru only location after two disastrous days with long lines.

It was much smoother sailing, though the long, slow lines were still an issue, as the White House announced the Fair Park site will become a federal hub.

County leaders were forced to think outside the box to ensure the temperature sensitive vaccine was safe.

"Waited out in the incoming lot for about three hours. Once we got moving, it was very, very fast," 82-year-old Carl Delles said.

Delles was getting his second shot, along with most others who arrived on the first day of the Fair Park site operating as a seven-lane drive-thru only.

The site is expected to see even more traffic soon after the White House announced Wednesday the Fair Park site will be a federal distribution partner. 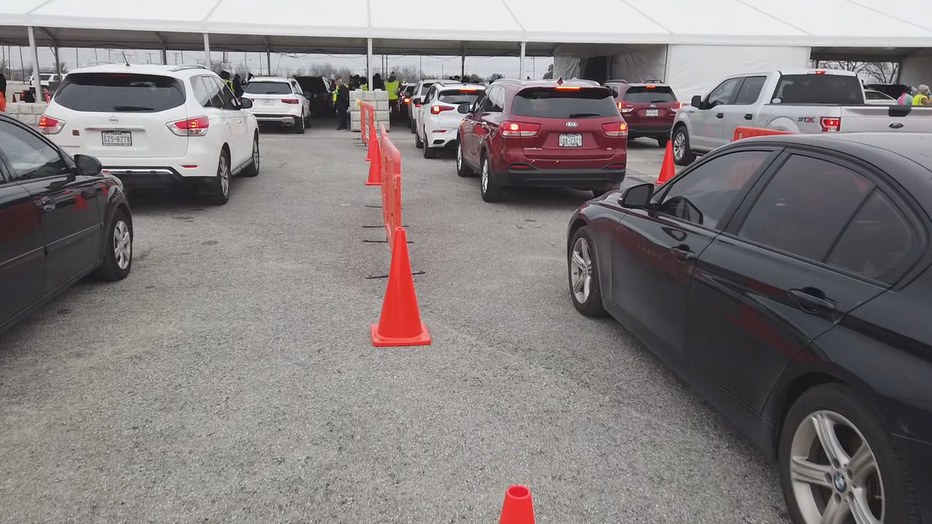 "The wait wasn’t so bad, and I had other things to read, and I brought a candy bar for energy and I had a water bottle," Delles said.

On Tuesday, the site had to pivot last second.

Plans were to open the site as a drive-thru, but desperately needed equipment didn’t arrive on time, forcing elderly people who anticipated staying in the warmth of their cars to park and make the trek inside.

Dallas County Judge Clay Jenkins said the heaters and generators, necessary to keep the tents above 40 degrees for the temperature-sensitive thawed vaccine, did finally arrive.

But instead of risking it, the vaccines are waiting for use in his Tesla.

"We’ve got it on like there’s a dog in it. But my dog today is the vaccine, and its 71 degrees in there all day," Jenkins said.

Those who got out of line because of ridiculously long waits earlier this week were invited back Wednesday.

And those like Penny Brewer, who drove with her husband from Murphy after receiving a QR code from the county, only to be turned away once they arrived because he wasn’t over 65, were also invited back.

A computer glitch was at fault.

He ended up getting vaccinated elsewhere.

Karen Young had a similar experience.

"I was here [Tuesday]. I was in the car for five and a half hours," she said.

Young returned Wednesday, and spent another five hours in line, but successfully received her shot.

Like many others, she said port-a-potties are few and far between, making the wait unbearable at times.

"It’s a process. I hope it’s improved by the time I get my second shot," she added.