Dallas County got off to a rough start when it opened drive-through vaccinations Monday at Fair Park.

DALLAS - Dallas County got off to a rough start when it opened drive-through vaccinations Monday at Fair Park.

The line of cars stretched all the way around Fair Park down Barry Avenue to I-30.

The county says there were multiple issues.

Monday was the first day the county hub providing the second shot of the two-round vaccination. The drive-through lanes were for second shot recipients only.

The regular walk-up vaccination location was dedicated for 1,500 people with first shot appointments.

People said there were no signs, causing confusion. Vehicles for both groups ended up in the same line.

"We have been sitting in line since 9:20 this morning for an 11 o’clock appointment for my father’s shot, and we just now been sent over here to the mega center," said Cindy Altus. 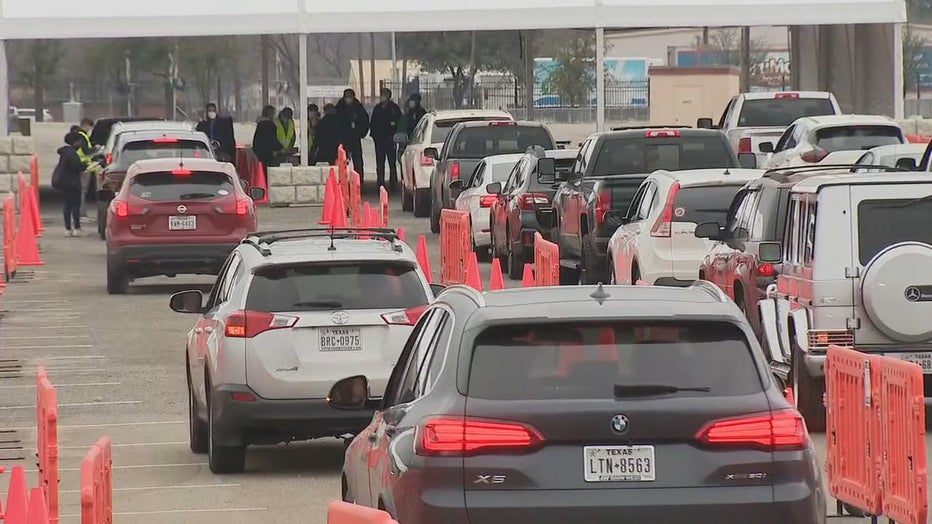 "I think we were in line for three hours to get to a spot that had two stalls open," said Landen Burger, who waited in line to get vaccinated. "And then they changed the plan and sent us to this new mega center which has three stalls open."

The county says another issue that caused delays was people lining up hours before their appointment.

Those scheduled for second doses were under the old appointment system that caused problems during the original rollout.

Since then, the county has gone to a more efficient QR code appointment system.

After sunset Monday, hundreds of cars were still in the Fair Park parking lot.

County Judge Clay Jenkins is promising that everyone with an appointment who was in line would get vaccinated, regardless of how late things may go. And the vaccination process appeared to go late.

The obvious benefit to a drive-through site is not having to park your car and be shuttled to the indoor setup.

"We were just glad we were able to get the vaccine," said Pam Chism. "This small inconvenience wasn’t that bad."

The county plans to make the entire Fair Park operation drive-through on Tuesday. All of the vaccinations are being handled by appointment only.

Jenkins hopes the drive-thru process will eventually get people in and out within 40 minutes.

People must still make an appointment and will receive a unique QR code.