Officers out making sure St. Patrick’s Day celebrations in Dallas don’t get out of hand

With St. Patrick's Day around the corner, early celebrations are happening during the first weekend that all businesses in Texas can reopen to 100% capacity after statewide COVID-19 mandates were lifted earlier this week.

DALLAS - With St. Patrick's Day around the corner, early celebrations are happening during the first weekend that all businesses in Texas can reopen to 100% capacity after statewide COVID-19 mandates were lifted earlier this week.

St. Patrick’s Day weekend appeared different than in years past.

Crowds were out celebrating along Greenville Avenue in Dallas, but for the second year in a row, the parade and block party was cancelled because of COVID-19.

"It’s kind of been a little weird walking around with no mask when you’ve been like, where’s my mask, for the last year," Dara Boswell said.

RELATED: Dallas PD will have a presence on Lower Greenville for St. Patrick's Day events this weekend

Boswell said she had the virus, and has since been vaccinated, so she feels comfortable being out to support local businesses.

"Actually feels like I’m doing what I’m supposed to be doing," she said.

It’s the first weekend Texas businesses can operate at full capacity, and many are now trying to make up for lost revenue.

"We’ll sell what we can and do what we can, and try to make the most of it," Amanda Campbell said.

Campbell is general manager at Halcyon, and said not having the parade means they’re missing out on a lot of money, as they would make about a month’s worth of money on a typical parade day.

City of Dallas code compliance officers were checking in Saturday to make sure no business went beyond capacity.

Officers said they’re getting plenty of cooperation. The police and fire department are patrolling too. 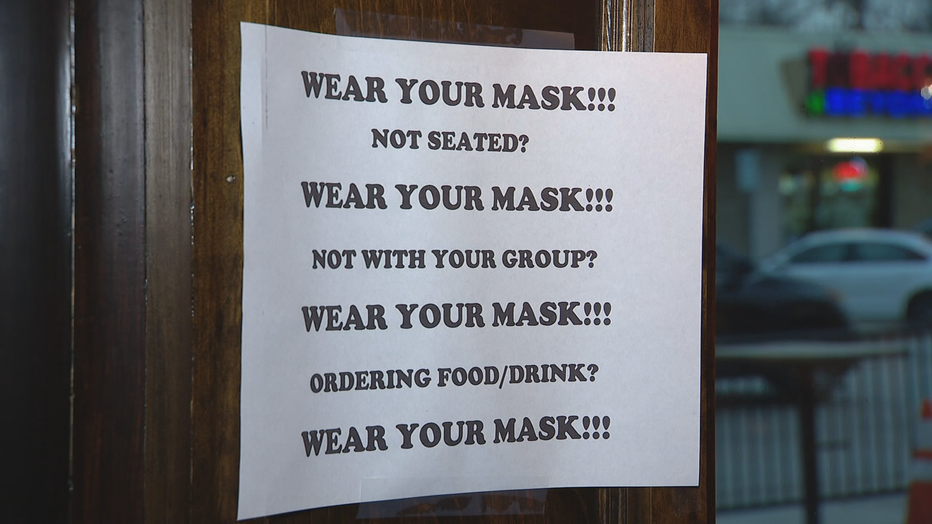 The city said there is no occupancy limit for many outdoor patios.

But code officers did make the owner of the Dubliner remove port-a-potties this weekend because they said he didn’t have a permit and that the portable restrooms could encourage more people to gather beyond occupancy.

The owner told FOX 4 that he spent $1,500 to rent them to encourage more people to be outside, but then more were lining up indoors.

"And so they had to turn their port-a-potties around so that people couldn’t use them," said Rod Lee, who lives nearby.

Lee just hopes it doesn’t lead to some using his lawn as a restroom.

"They’ve only got two bathrooms and they’re real small, so that’s just going to push people out into the streets. So a dangerous precedent to be set," he explained.

He believes there’s a balance between supporting businesses and being safe.

"We hope it’s not a super-spreader event, you know. I still have my mask," Lee added. "You’re going to be a foot, foot and a half away from each other the majority of the time you’re out there, even on the patio."

People feel it’s been a tiring year because of COVID-19.

"I’ve always felt that throughout all of this, you have to assess your own risk level and make the decision accordingly," Boswell said.

This weekend, Boswell is enjoying supporting businesses while being outside.

"I’m happy to give them my money because they’ve been hurting for so long," she said.