Police officers in the Fort Worth suburb of Lake Worth shot and killed a man after a chase.

LAKE WORTH, Texas - Police officers in the Fort Worth suburb of Lake Worth shot and killed a man after a chase.

It started early Friday morning when police tried to pull over a vehicle for speeding on Loop 820.

"As soon as he put his car in drive and began to follow the vehicle, it turned off all of its lights. So now it was driving at a high rate of speed completely black on the interstate," said Lake Worth Police Chief JT Manoushagian.

Officers chased the SUV through the city of Lake Worth, White Settlement and into Fort Worth.

The officers were warned that the three people inside the SUV might be armed.

"We were on the radio with neighboring departments, and they advised us over the phone that they had had prior dealings with this vehicle, possibly involved in some drive-by shootings and that our officers should be careful and treat it as if they were armed and dangerous," Chief Manoushagian. "Once we received the information that these subjects were armed and dangerous, we knew that there was a community need where we needed to intervene."

The chase ended in the Como neighborhood of Fort Worth after the driver hit a curb and blew out a tire. The three suspects then got out and ran in different directions.

Police said one suspect pointed a piston at the officers as he was getting out of the vehicle.

"At that time, three male subjects exited the vehicle and began to run on foot. Two officers were involved in the pursuit at this point. The left rear passenger in the vehicle, a male, exited the vehicle with a firearm in his hand and subsequently pointed it at one of the officers. The officer said, ‘Gun, gun gun! He’s got a gun.’ And then shortly there after our officers engaged the male and shot him," the chief said.

The officers immediately performed CPR on the man but he died on the way to the hospital. The medical examiner identified him as Estevan Xavier Ramirez, of Fort Worth.

Police have not yet located or identified the other two suspects. 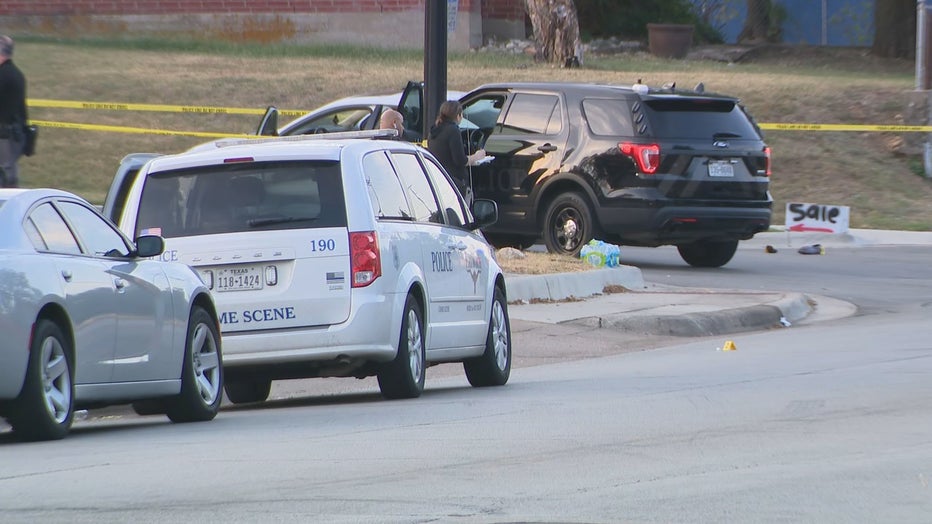 The officers are on paid leave while the shooting is investigated.

"Ordinarily, for speed and even the reckless behavior, turning your lights off may or may not trigger a pursuit. But once we receive the information that the subjects were armed and dangerous, we knew there was a community need where we needed to intervene," Manoushagian added.

Chief Manoushagian said he has personally reviewed video of the shooting and was able to clearly see the suspect’s gun.

"There’s multiple videos of this incident from all different angles. So, we’re very confident that once it’s all reviewed and presented in court that it will show a complete picture of what happened," he said.

That video will not be released to the public at this time and Manoushagian said it will be up to Fort Worth police as to whether it will be released in the future.