North Texas firefighters are on the ground in Louisiana to help residents recover from the extensive destruction of Hurricane Ida.

GALLIANO, Louisiana - North Texas firefighters are on the ground in Louisiana to help residents recover from the extensive destruction of Hurricane Ida.

Two Fort Worth Fire Department firefighters said that from what they’ve seen, it will take months, if not years, to repair the damage done to the state’s infrastructure after the latest hurricane.

"If we had to rate the damage, it's 100%," Fort Worth Fire Department Lt. Brant Frazier said.

Frazier and battalion chief Bobby Fimbres are among the group of North Texas firefighters deployed to help Louisiana recover from the devastation of Ida.

"There is not a building, a vehicle, a boat, anything, type of structure, where somebody could live or stay, at a fishing camp. Everything has damage," Frazier said.

Frazier and Fimbres are in Galliano, Louisiana, a town outside the New Orleans levee system that felt some of Ida’sstrongest winds for more than 12 hours.

The damage has been breathtaking.

"There's no power, there's no traffic lights, there's no street lights. So when it gets dark, it's dark. You can't see anything," Fimbres said.

"It's going to take months in order to restore that water. The last we heard from the electric company down here, they're looking at four to six weeks out before they can even think about starting to restore some of the grid there," Frazier said. 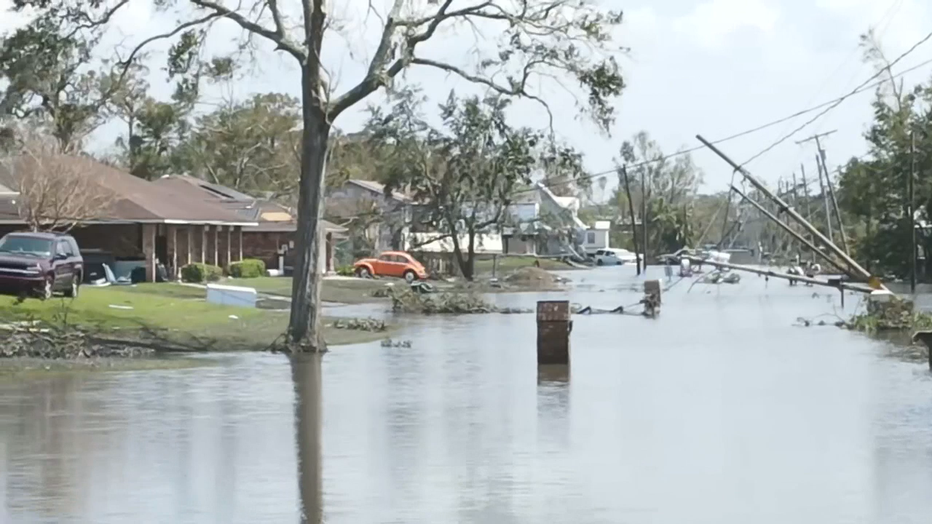 Along with no running water or electricity, first responders said there’s also no fuel or reliable cell service.

The fuel shortage is causing long lines stretching for miles as people desperately try to get essentials.

"They've lived through several hurricanes in this area and they said that this one was nothing like they've ever seen before," Frazier said. "There was absolutely nothing that they could do at that point. There was a huge feeling of helplessness, not being able to do anything to change the condition that they were in."

There have been 19 Fort Worth firefighters deployed to help, as well as others from Wylie, Plano, Waxahachie, McKinney, and Little Elm.

They are hoping to help their neighbors in Louisiana.

"They're very resilient. They don't ask for help in this. They absolutely need it," Fimbres said.

Fort Worth firefighters are scheduled to be in the area for 14 days, but they said they could be asked to stay longer.

RELATED: Ida's aftermath: 1st lights turned back on in New Orleans as many wait for relief