A woman filmed a waterspout moving across Cedar Creek Lake in Malakoff, Texas, on Feb. 15. Credit - Allie Dalrymple via Storyful

MALAKOFF, Texas - A large waterspout was seen swirling over a lake in Texas as record cold temperatures gripped the region and left millions without electricity.

The phenomenon was filmed Monday near Cedar Creek Lake in Malakoff, Texas, located about 70 miles southeast of Dallas. Allie Dalrymple told Storyful she was driving with family when they noticed what looked to be cold core funnels forming over the water.

"A few looked like they were touching the ground and moving but broke off pretty quick after," Dalrymple said. "My family and I were surprised to see it to say the least."

The waterspout was caused by the incredibly cold Arctic air that recently moved into the area and over open water, according to FOX 4 Meteorologist Evan Andrews.

"The temperature differential caused rapid rising motions which helped to cause the spouts," Andrews said. 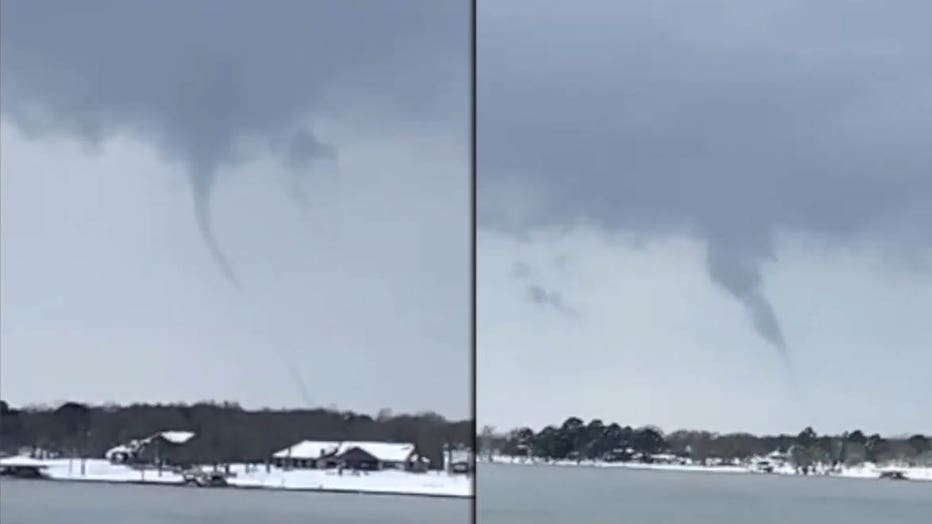 Video of the waterspout was shared on Twitter, and some had incorrectly labeled it as a so-called "snownado." Snownados, otherwise known as snow devils, are very rare occurrences, according to the World Meteorological Organization. They can form when surface winds generate a vortex over snow cover, creating a whirling column of snow over the ground.

Andrews said similar videos were captured at several area lakes in the state, including Lake Fork, Lake Lewisville and Lake Texoma. He added that such occurrences would have been tornadoes if they made it over land, but none of them did.

Texas experienced historic snowfall and single-digit temperatures this week, creating a surge in demand for electricity to warm up homes — overwhelming the state’s power grid in the process. The Dallas-Fort Worth area recorded its coldest temperature of -2 degrees Fahrenheit at the city’s airport on Tuesday, the lowest reading recorded since 1949, according to the National Weather Service.

Nearly 3 million customers in Texas remained without power on Wednesday, as yet another winter storm was set to hit Texas and other parts of the southern Plains, according to the National Weather Service.

The inclement weather also impacted the country’s vaccination efforts. The power outages forced one Texas county to scramble to get more than 8,000 doses of Moderna’s coronavirus vaccine into arms, while the supermarket chain Publix canceled COVID-19 vaccine appointments in Florida on Wednesday, citing shipment delays.

The Pacific Northwest also saw rare snow this week, and at the rough edge of the arctic blast — a tornado tore through a seaside town in North Carolina, leaving at least three people dead.

The record subzero temperatures in warmer places has been blamed on the polar vortex, a weather pattern that usually keeps to the Arctic, but is increasingly visiting lower latitudes. Scientists say global warming caused by humans is partly responsible for making the polar vortex's southward escapes longer and more frequent.