Lone Star High School in Frisco ISD canceled classes Monday and Tuesday as police investigated a threat. In a letter to parents, the district originally said it would hold classes with extra security. But then it made the decision to cancel classes for the safety of students and staff.

The school is in the northern part of the city off Panther Creek Parkway, west of the Dallas North Tollway.

In a letter to parents, the district originally said it would hold classes with extra security. But then it made the decision to cancel classes for the safety of students and staff.

"The initial threat came in the form of a social media post Friday and the second threat was via email Sunday evening. The Frisco Police Department is at the Lone Star campus today continuing to investigate the origin of the social media post and letter," Frisco ISD said in a statement.

The email references bullying and a bomb hidden on campus.

"Our department will exhaust all means necessary to ensure the safety of the students, faculty and staff. We are working diligently with Frisco ISD and other partners to investigate these threats and find those responsible," the Frisco Police Department added.

Before Autumn Tupper’s son even made it to school Monday, Lone Star High canceled classes. Hours later, the district announced Tuesday's classes would also be canceled.

"Seeing the second social media post, a screenshot of that, it was specific and concerning to me as a parent," she said.

After multiple threats surfaced through social media and emails, Frisco police sent extra security to investigate. Police assure they didn’t find anything suspicious or that posed a threat. 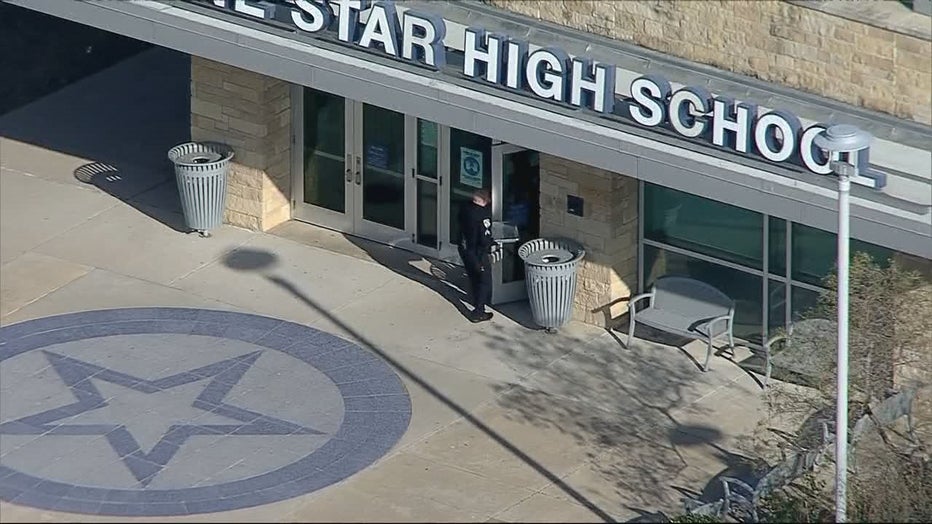 But due to details still unclear in the investigation, the district decided to keep kids home.

"I want to make sure they know who is behind this and they are being held accountable," Tupper said.

Elvin Roberson has six kids in Frisco ISD. Three of them are at Lone Star. He spent Monday calling his child’s middle school, worried the threat has spread.

"It could trickle down to other areas and other schools," he said.

"In my 38 years, I’ve not seen a credible where someone announced ahead at a specific date and time and school that a certain crime will take place," he said.

Last Friday, there was an increase in police presence in Carrollton, Keller, and Forney following school threats.

"We should treat people like this, in my mind, like criminals. They are holding the school system hostage," Miller said.

Frisco ISD’s superintendent’s letter also gave a reminder to students and parents any threats could leave to prison time.

It’s a conversation Tupper says she plans to have again.

"I’ve told them one little thing and you can lose your job," she said.

It’s still unclear if there will be school on Wednesday.

If students do come back, backpacks and purses will not be allowed on campus.

Friday is the final day of this semester.

Anonymous tips are also welcome by texting the word "FriscoPD" and the tip information to 847411.