Tuesday's severe storms in Grapevine left behind a trail of damage and at least 5 people injured, but a sign of the holiday season remained untouched by the weather.

GRAPEVINE, Texas - The severe storms in Grapevine left behind a trail of damage and at least 5 people injured, but a sign of the holiday season remained untouched by the weather.

"I was watching the news trying to keep up with what's going on. I was following the tracing of it across Colleyville, Euless, Bedford then my lights flickered," she said.

Venable knew it was time to take cover.

"I heard what sounded like a train coming down the street, which is realized is not a good sound. I immediately left my living room to go into bathroom, and before I can even get the door shut I heard the loud thud crash on my house. I wait a few seconds and when I came out it was silent," she said.

She found that porch in a surprising place. 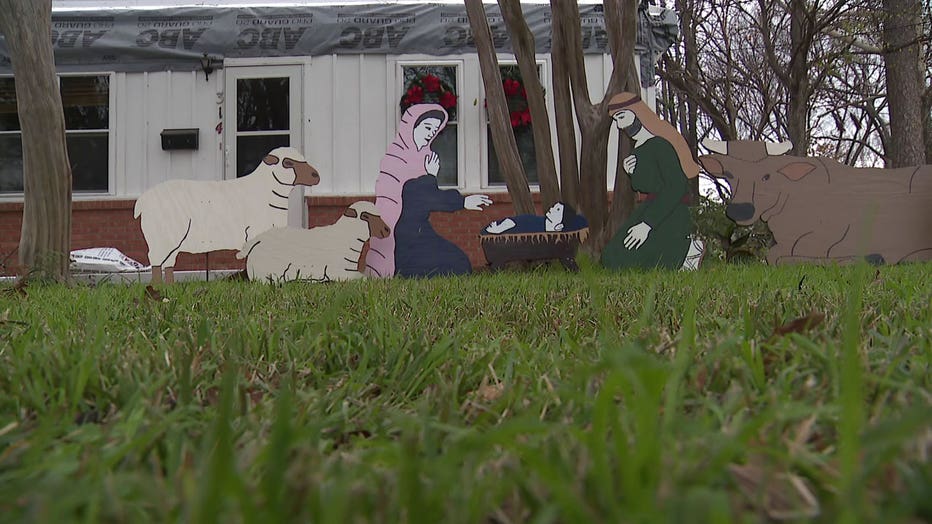 "That's my porch up on the top. It just flipped it onto my house," said Venable.

"She called me frantic, I'm trying to fly home to get home, and as long as I got home to make sure she was okay, the house is secondary. Family comes first, my wife comes first. The Lord Blessed us," he said.

While the storm did plenty of damage, the Venable's manger scene, built by Ronnie 5 years ago, was not affected.

"It did not budge, looks like it did when we first put it up last night. Amazing," Paula said.

"That shows right there that the Lord takes care of you," Ronnie added.

The Red Cross was in the neighborhood on Tuesday helping address people's needs.

The Venables will be staying in a hotel while their roof is repaired and power is restored.