DART CEO Nadine Lee defended her decisions during two February winter storms. But council members said the agency has to find a way to provide better service in the future.

DALLAS - The new CEO of DART faced the Dallas City Council in response to concerns about an unprecedented shutdown of rail and bus service.

DART CEO Nadine Lee defended her decisions during two February winter storms. But council members said the agency has to find a way to provide better service in the future.

It is the timing of DART's historic shutdown of bus service that is perhaps the most perplexing. The decision was made to shut buses down just as the ice was beginning to melt.

Dallas City Council members are frustrated with DART's handling of two winter weather events that shut down light rail both times and suspended bus service one time for 48 hours. 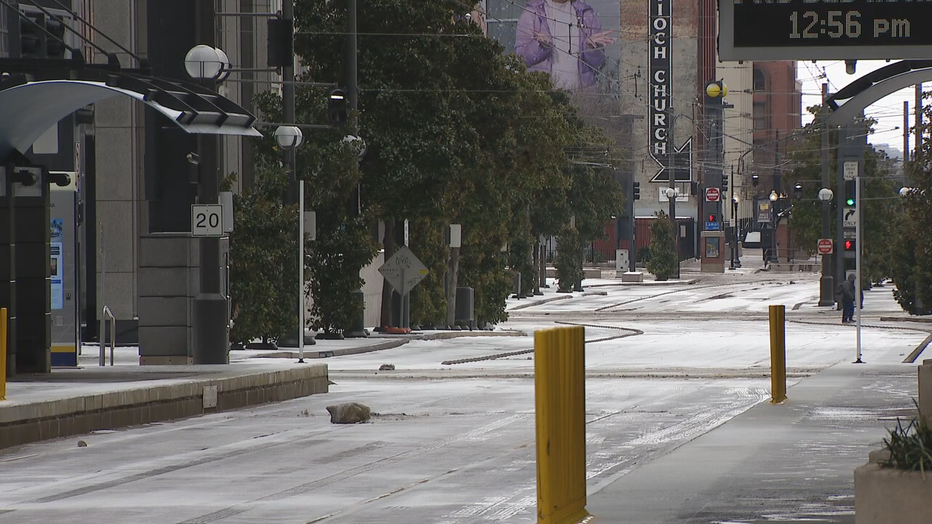 "To me, you did not prepare for the ice," he said. "I did get many calls from companies that their employees could not get to work."

It was Lee’s first winter in Dallas after moving from Los Angeles. She defended her unprecedented decision to shut down bus service during the first storm in early February.

"DART had 93 buses stuck. DART has never had this magnitude of buses stuck in three hours as a result of changing conditions," she said.

DART provided FOX 4 images of buses out on icy roads.

"We were concerned for riders and operators who had to stay with buses with their foot on the brakes to keep buses from sliding," Lee said.

It was not until two days into the storm on a Friday morning that DART announced bus service would stop at noon and resume Sunday at noon.

Councilwoman Cara Mendelsohn challenged that decision, noting that temperatures rose above freezing Friday afternoon and allowed ice to thaw before another hard freeze that night.

"Seven hours into your shutdown, the city of Dallas deactivated the emergency operations center," she said. "No longer an emergency, but yet for 40 additional hours we remained without bus service."

"At the time we made the decision to stop service, the forecast was projecting no significant change to the icy road conditions," Lee said.

That's when FOX 4 met William Burns, who was among those who did not hear about the shutdown.  He spent $1.50 for a train ticket to try to make a VA visit before he realized it was no good.

"Because there was no signage on the machine that prevented him from buying a ticket. Now, he was waiting and waiting and spent his money and realized the train was not coming," Mendelsohn said.

The second rail closure lasted until Saturday even though most schools and businesses reopened Friday.

"Do you think that you acted as a lifeline?" Mendelsohn asked.

"When we suspended bus service, we failed to be a lifeline," Lee admitted.

Lee said she will be looking for ways to pivot more quickly when conditions begin to improve. She said they are also short 130 operators, and some operators could not get into work themselves in the ice.

One council member suggested that the agency could try picking up its own bus operators if needed.