Their first hotel rooms were already booked for Texas-OU weekend, so the city found a new temporary place to stay for the next few days.

DALLAS - Residents who lived in a Dallas apartment complex damaged by an explosion moved to a new hotel on Thursday.

Repair work is still ongoing at the Highland Hills apartments a week after the blast. Their first hotel rooms were already booked for Texas-OU weekend, so the city found a new temporary place to stay for the next few days.

More than 100 residents were moved Thursday to the Hilton Anatole hotel, where the city has secured about 80 rooms.

"Right now we’re looking at anywhere from three to five days. We don’t know. It’s going to be a day by day situation, but for at least five days," said councilman Tennell Atkins.

Atkins, who represents the area, told FOX4 one apartment building was destroyed and two have sustained significant damage that needs to be repaired before those residents move back.

"It will take time, it’s not going to happen overnight. The city of Dallas said, ‘You’re in Dallas, you’re our resident, we’re going to make sure you’re taken care of,’" Atkins said.

City officials say work is still ongoing at the apartment complex to get gas and hot water restored to the existing units. Officials also said the Dallas Housing Authority is assisting residents with vouchers to move into new housing on a case by case basis.

The stress of shuttling from hotel to hotel and not knowing what will happen next has been weighing heavily on residents like Ashley King and her family. 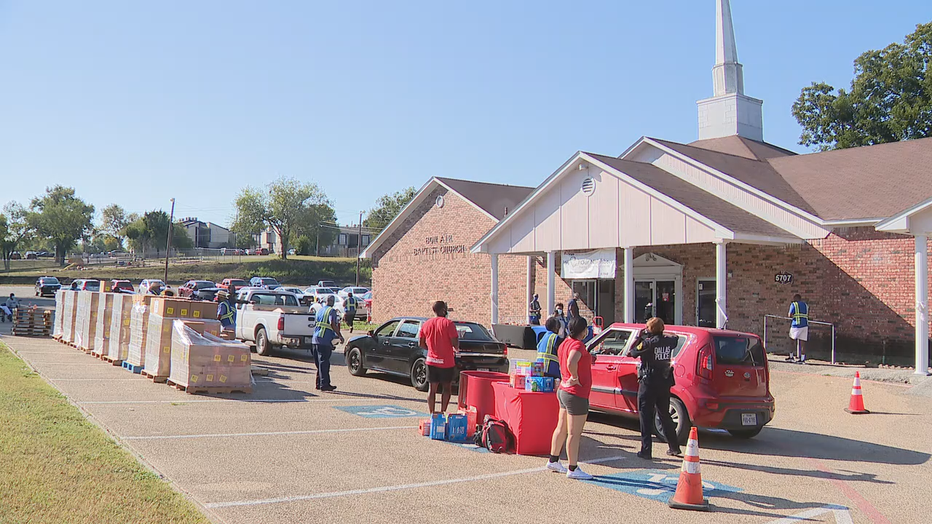 "It helps because I have children. Last night they had to eat dollar cup noodles because I didn’t have any money for food, and the last meal is at 5, so y’all giving us food boxes is really helping my kids be able to eat," King said. "As long as my kids eat, I’ll go to bed hungry, I don’t have a problem with that."

At least one lawsuit against Atmos Energy has already been filed in Dallas County on behalf of a leasing manager at the apartment complex who was injured. It seeks $1 million-plus in damages.

"Buildings don't just blow up, they blow up because someone, there was some failure somewhere in someone's job," said attorney Dylan Bess, Morgan & Morgan.

His firm is representing multiple residents, including at least one woman who was injured by shattered glass in the explosion. They’re investigating multiple claims from residents about prior reports of smelling gas and insurance issues.

"We understand that many of the residents there were under the impression that they had been paying the apartment complex for renter's insurance. Turns out there's no renters insurance," Bess said.