The city of Dallas has partnered with the Red Cross for temporary hotel housing for more than 200 displaced residents whose apartments remain off-limits.

Thursday morning, crews worked quickly to bring down the building where the explosion happened at Highland Hills Apartments.

Hundreds of people are now without a home, some left with just the clothes they had on when they evacuated from the apartment building.

The cause of the explosion is still under investigation. The city of Dallas has partnered with the Red Cross for temporary hotel housing for more than 200 displaced residents whose apartments remain off-limits.

"We don’t know how long it’s going to take. Right now, they’re staying in the hotel for 72 hours, but what happens after 72 hours? Where do they go after that?" asked Dallas City Councilman Tennell Atkins (District 8).

For displaced residents, that means time is running out to find a new place to live.

"What are we supposed to do? We have lives, we have children, we have work. We can’t just wait around, figure out where we’re going to go, we’re literally going to be sleeping on the side of the road," Audelia Camarillo said.

Camarillo and her family left the Highland Hills Apartments Wednesday with only the clothes they were wearing.

"We need a home, I don’t know how else to describe it," she said. "We need a place to stay, a place to continue our lives without having to worry is this going to happen again?"

It was a call about a suspected gas leak that brought Dallas-Fire Rescue crews to the apartments Wednesday morning. Multiple residents said they reported smelling gas on repeated occasions to management.

"We would report it, and nobody would ever come out and fix it or even care or be concerned about it," Camarillo said.

Ervy Jennings lived in a nearby building from the collapse. He says residents complained about a gas odor before the blast happened.

"I want answers," he said. "I want to know what really triggered it."

Jennings and others are staying at a Downtown Dallas hotel for three days, but many don’t know what they will do after that.

Atmos Energy said its crews were called out to the scene Wednesday morning and verified the gas was shut off at the apartment complex.

Atmos representatives said they’ve verified their system was operating as expected and found no indication their system was involved. That does not address whether gas was leaking from an appliance, like a stove or furnace.

Dallas Fire-Rescue wouldn’t say whether they suspect any home appliances may have played a role in the explosion. They would only say the items are part of the investigation. 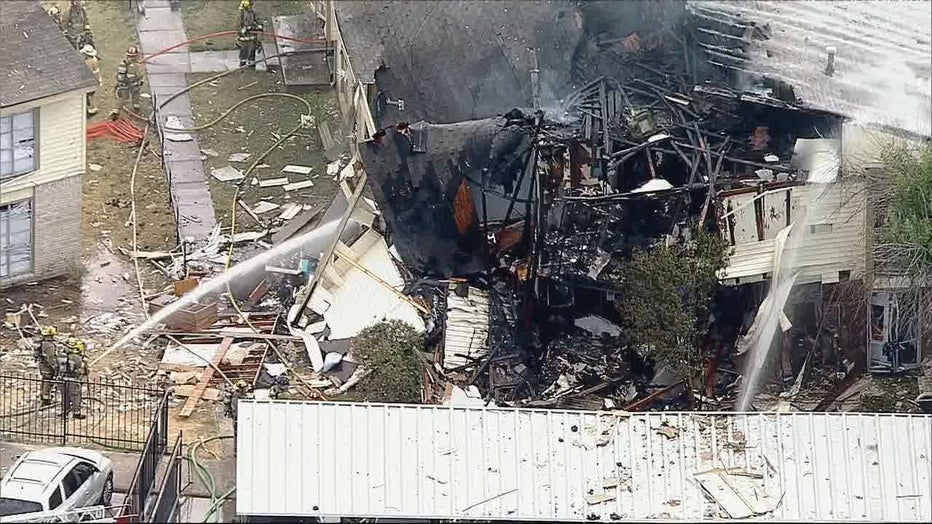 The property owner, Odin Properties, told FOX4 it is waiting on investigators to determine the cause of the explosion but did not address the complaints from residents.

City officials said they will continue to investigate those claims.

"If you’ve got documentation, we will go back and track what happened and what we could have done," Councilman Atkins said.

"If the property management would have responded to calls or maintenance in a proper time, this probably could have been avoided," Camarillo said.

Dallas-Fire Rescue officials have not said if they’ve been called out to this location before for reports of a gas leak.

For Oak Cliff, a non-profit that provides education and food resources for families, had extra food from its Wednesday food distribution and decided to help those who were displaced.

Michael Berry and Kevin White work for the organization.

"We have family members and friends that live in that apartment complex," Berry said.

They drove around Thursday to hotels to drop off food and other items to displaced residents.

"We have to," Berry said. "There was a need. We saw the need. We had the resources."

Meanwhile, Councilman Atkins is requesting citizens donate to the Red Cross to help residents who are now homeless.