Some parts of North Texas saw light snow flurries Saturday as the entire region saw a dramatic drop in temperatures from a cold front that will move through late Friday.

DALLAS - Light flurries were seen in parts of North Texas on Saturday.

The taste of winter came with a dramatic drop in temperatures across the region due to a cold front that will move through late Friday and overnight.

Temperatures in the metro areas started to drop after 10 p.m. Friday into the 30s, with wind chills in the teens and 20s.

Winds across North Texas are 20-40 MPH on Saturday, with some gusts as high as 50 MPH. High temperatures will only be in the upper 30s for most of the area.

There were snow flurries in parts of North Texas on Saturday afternoon, with potential of more into the evening for areas in the northeast part of the region. However, it would be minor accumulations of less than a half-inch.

Parts of Collin, Denton, Rockwall and Dallas counties could see some snowflakes in the air, as well, but nothing accumulating on the ground.

Lows on Saturday night and into Sunday will be in the 20s and possibly in the teens in some outer areas. 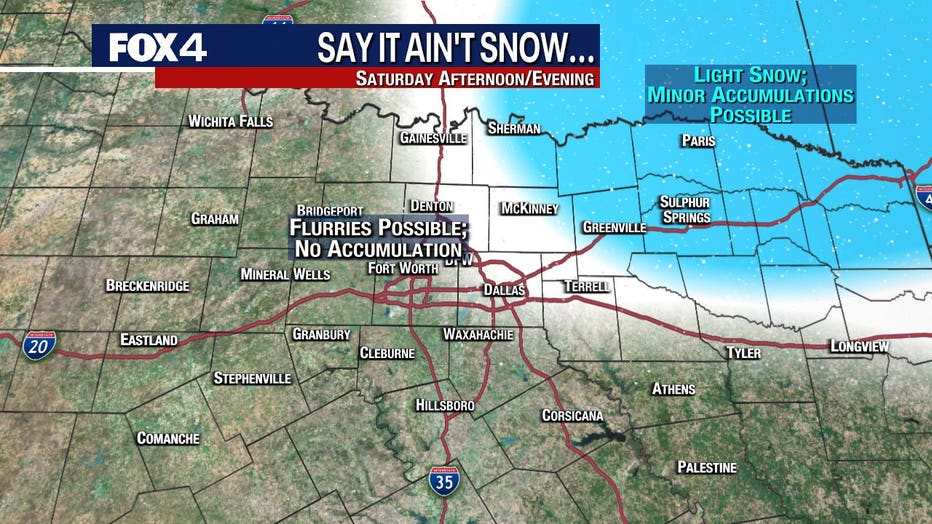