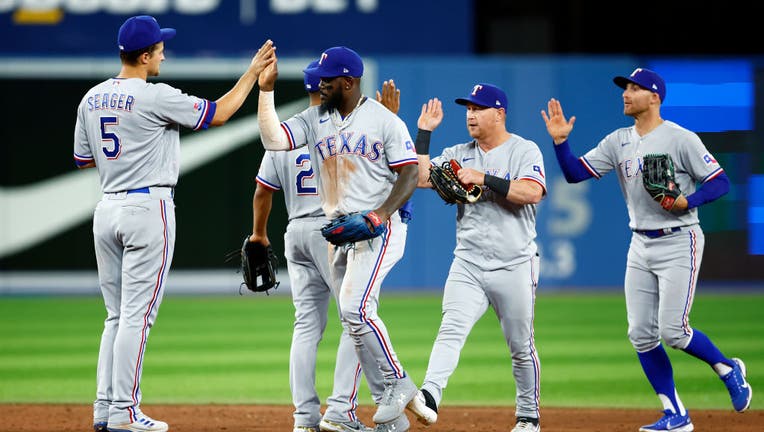 TORONTO, ON - APRIL 10: Corey Seager #5, Brad Miller #13, Adolis Garcia #53 and Kole Calhoun #56 of the Texas Rangers celebrate the victory following a MLB game against the Toronto Blue Jays at Rogers Centre on April 10, 2022 in Toronto, Ontario, Can

ARLINGTON, Texas - A new season brings new hope for Texas Rangers fans. The team will take on the Colorado Rockies Monday for the 2022 home opener at Globe Life Field.

Texas had a 60-102 record overall and a 36-45 record in home games last season. The Rangers pitching staff averaged 7.8 strikeouts per nine innings while giving up five runs per game in the 2021 season.

But two new veteran sluggers signed in the off season, Marcus Semien and Corey Seager, are already bringing some much-needed leadership and enthusiasm to the field.

General manager Chris Woodward has said Semien and Seager have been integral in the abbreviated spring training in elevating the whole tone in the locker room and on the field.

The team is celebrating its 50th season this year. Announcer Chuck Morgan has been with the team for 39 of those 50 years.

"I’m excited about it. The Rangers have been here for 50 years since they moved from Washington and always have gotten great support from the media and fans and just it’s just fantastic. And I’m saying right now, ‘Get your caps on. Make a lot of noise today and get on the bandwagon now,’" he said.

For the anniversary, the team will be selling and giving away some special merchandise like retro bobblehead figurines and baseball cards, a Nolan Ryan pitching rubber and even plush dots to celebrate the iconic dot races.

Rangers fans are excited to watch the first home game of the season at Globe Life Field. Good Day's Shannon Murray got the chance to be a part of everyone's favorite dot race. Can she win as the blue dot?

"Saturday night the Corey Seager jersey, it will be Corey Seager’s first jersey. He’s gonna be in a 1972 replica jersey," Morgan said. "It’s going to be a great year and we’re gonna have some fun this year to celebrate 50 years of baseball."

Baseball fans may be skipping work today to watch the Rangers home opener against the Colorado Rockies. Good Day's Shannon Murray is at Globe Life Field in Arlington with a look at what's new at the concession stand including these brisket egg rolls.

The Rangers also spiced up their ballpark menu to make sure the 2022 season has a little more flavor.

Casey Rapp, the man behind the unique concessions, said his team usually starts brainstorm at the end of each year.

Some items on the menu this year include a spicy alligator corndog, corndog chili pie, a chicken fried brisket sandwich, mac and cheese nachos and brisket egg rolls.

"This was invented by a fan in 2020 and we finally get to roll it out," Rapp said about the brisket egg rolls. "It’s portable. You get the barbeque sauce on it instead of soy sauce and it’s really great.

The Texas Rangers will have a sixth grader throw out the first pitch at today's home opener in Arlington. Good Day's Shannon Murray finds out what makes Orion Jean the perfect candidate.

A sixth grader from Mansfield will throw out the ceremonial first pitch.

Orion Jean was on the cover of Time magazine as the 2021 Kid of the Year.

As a "kindness ambassador," he donated 100,000 meals, 500,000 books and thousands of toys to children in need during the pandemic.

He will pitch to Hall of Famer Pudge Rodriguez to kick of the game.

"Very nervous. It's amazing to be able to have this opportunity on, you know, the 50th anniversary and a home game. It's a lot of pressure, but I'm excited. And I've never done anything like this before, so I'm hoping I'm not going to mess it up and I'll be able to make everyone proud," Jean said.

There are still some tickets available for Monday’s matchup against the Colorado Rockies.

Parking lots open at 10 a.m. and gates to the ballpark open at noon. The first pitch will be thrown just after 3 p.m.