"This is a dream come true honestly," said Taylor. "Something you dream about especially as a kid, growing up in Dallas."

Being the Rangers starting pitcher for the home opener is something the man from Royse City could not see coming true in his lowest moments.

"I wouldn’t believe you," said Taylor of getting this opportunity. "Just very thankful."

No matter how perfect or imperfect Taylor winds up pitching against the Colorado Rockies, Monday will be a victory for the family that’s stuck out those highs and lows – that’s been on the other end of Taylor’s 2 A.M. phone calls.

In those moments, Taylor’s dad Robby tells him, "Taylor you’ve got to push through."

His sister, Robyn – born exactly four years to the day after Taylor – has seen her older brother learn to thrive in those tough times.

"That’s when I feel like Taylor prevails the best," says Robyn. "When he’s in those low moments."

Taylor’s doesn’t hide his appreciation for those three people who are always in his corner.

"I’m very thankful to have them in my life," says Taylor. "Especially my mom, you know, she’s the backbone of our family."

Says Debra, "I know Taylor went through some stuff that some other people, it would have broke ‘em."

When Taylor takes the mound on Monday, it will be four days shy of Jackie Robinson Day. This year will mark the 75th anniversary of Robinson breaking the color barrier in Major League Baseball.

Sadly, decades later, Debra Hearn says her son has faced racism in baseball along his way to the big leagues.

"When I say racism, it’s both ways," says Debra. "Blacks and whites. Because Taylor had some of his African-American friends in school make fun of him for playing baseball because it was a white sport. It was, ‘Taylor, you should be playing football. Why are you playing this white sport?’ And then he had the racism with the white kids."

"There were times that Taylor wanted to give up, he wanted to quit. He says, ‘Mom I don’t want to do this anymore.’"

Like Robinson, Hearn embraces the opportunity to be a role model.

"I really want kids that are from Dallas to use me to see that, you know, a kid from their area can do it as well," said Taylor.

It’s a point of particular proud for his mom.

"Here you are a local, black kid, from a small town in Texas," said Debra. "But here you are on one of the biggest stages in the world"

Taylor won’t be the only Hearn on the clock on Monday at Globe Life Field. Robyn will be reporting on the Rangers for News Channel 6, the local CBS television station in Wichita Falls, TX.

Getting the assignment to cover her first big league game? A big moment for Robyn.

Finding out her brother would be the pitcher? Something she says was surreal.

As for her game-plan for the Rangers press box on Monday while she watches Taylor work?

"Saying a lot prayers!" said Robyn. "I think I’ll have to bring a stress ball just to calm myself down!" 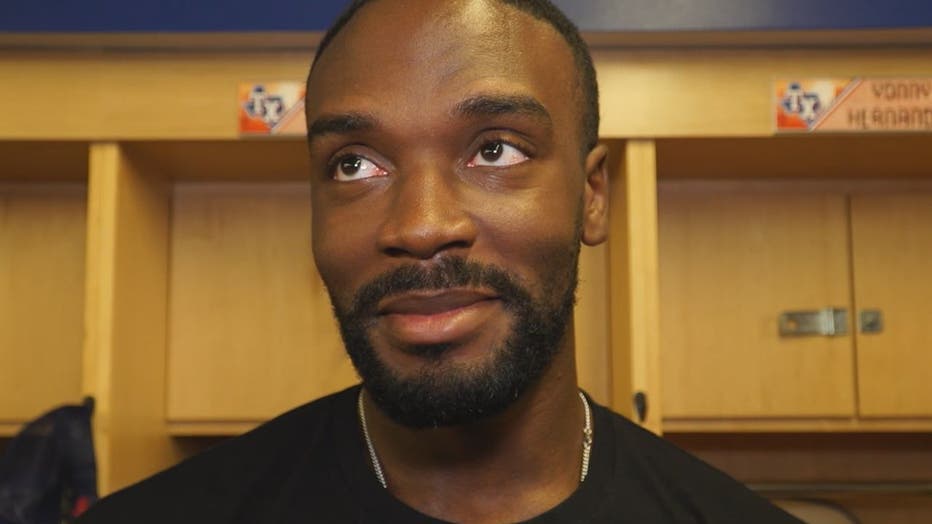 When Robby watches Taylor pitch, he’s quiet on the outside – while waging a continuous conversation internally.

She’ll watch the first pitch and that’s all she can handle.

"My stomach is just turning somersaults and I can’t sit there and watch it," she says.

"I will walk the stadium and I will stop in-between the sections and look and kind of see what he’s doing."

But easier to understand, after what happened in Seattle on April 25th, 2019, when Taylor made his Major League debut as the Rangers starting pitcher.

"That was a day you dream about," says Robyn.

"It didn’t go the way we felt it was going to go."

Taylor didn’t make it out of the first inning, giving up five runs and only recording one out.

In 39 pitches, the big league moment he had always dreamed about had turned into a nightmare.

"I was very, just, distraught," recalls Robyn. "Because I didn’t want Taylor to feel disappointed in himself."

Taylor would not pitch another big league game that season. In 2020, he was back with the Rangers, but only as a reliever.

Late in 2021, he finally earned a roll back in the starting rotation – winning four starts in a row as August bled into September.

Now his comeback has arrived at a new, dream-come-true moment.

Taylor Hearn has learned from the low times.

Owned who he is.

And refused to quit.

"Just because of how you start doesn’t mean that’s how you’re going to finish," he says.

The people who know him best, believe this is just the beginning…

"I know this is the start of a new chapter," says Robyn, with a smile.

Says Debra: "When people ask me to describe Taylor is one word, what he is to me, for me it’s, ‘Hero. He’s my hero.’"