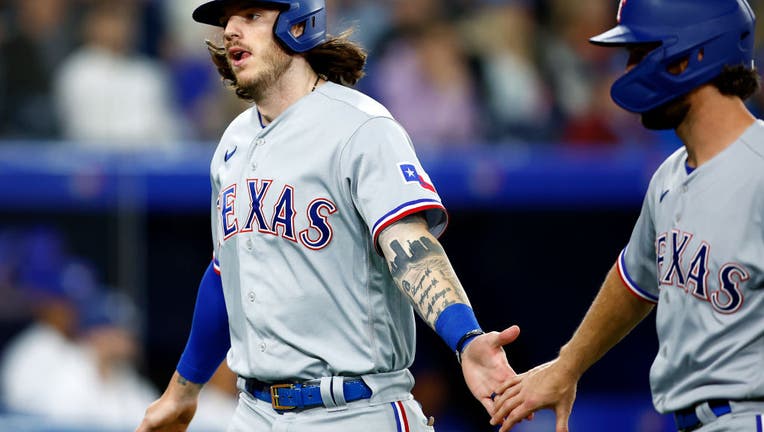 TORONTO, ON - APRIL 10: Jonah Heim #28 of the Texas Rangers scores a run on an RBI double by Brad Miller #13 in the fourth inning during a MLB game against the Toronto Blue Jays at Rogers Centre on April 10, 2022 in Toronto, Ontario, Canada. (Photo b

After blowing a seven-run advantage in 10-8 loss in Friday's opener, Texas tuned this game around with its biggest road inning since a six-run first at Baltimore on Sept. 7, 2019. Brad Miller had four RBIs to key the Rangers, and Nick Solak scored four runs and homered.

Miller pinch hit and sliced the second pitch from Julian Merryweather (0-1) up the left-center gap for a two-run double that tied it 6-6 and, one out later, Seager dumped an opposite-field, broken-bat single into left.

Pinch-hitter Nathaniel Lowe's RBI single and Miller's sacrifice fly built a 9-6 lead in the fifth off Ross Stripling. Heim and Miller hit back-to-back homers in the seventh against Taylor Saucedo, the first a two-run drive.

Brock Burke (1-0) struck out five in two innings, one of five Rangers relievers who combined for six shutout innings Texas avoided its first 0-3 start since 2017.

Guerrero's home run had an exit velocity of 117.9 mph.

Matt Chapman hit a three-run homer, and Guerrero, George Springer and Danny Jansen all had solo shots for Toronto, which has not started 3-0 since 1996. Springer's was the 44th leadoff homer of his career and his 12th against Texas, tying Rickey Henderson against Cleveland for most against one opponent.

Ryu retired nine of his first 11 batters, allowing a two-out homer to Solak in the second. Ryu gave up six runs and five hits in 3 1/3 innings.

OF Bradley Zimmer, acquired in a trade with Cleveland last week, joined the Blue Jays Sunday. To make room on the roster, INF Gosuke Katoh was optioned to Triple-A Buffalo.