FORT WORTH, Texas - TCU’s Sonny Dykes was named The Associated Press Coach of the Year on Monday after leading the No. 3 Horned Frogs to the College Football Playoff in his first season with the school.

Dykes received 37 of 46 first-place votes and 120 points from AP Top 25 voters to become the second TCU to win the award, which is presented by Regions Bank. The first two were won by Gary Patterson (2009, 2014), the coach Dykes replaced after last season.

"It’s the ultimate team award," Dykes told AP. "It’s indicative of literally everybody in our office, coaches, players, everybody, because more so than ever in college football it is truly a team effort." 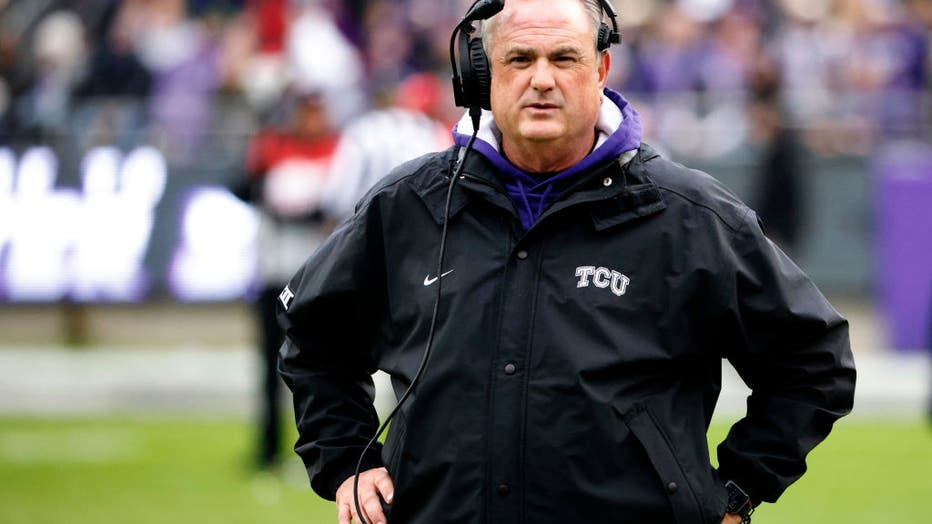 FORT WORTH, TX - NOVEMBER 26: Head coach Sonny Dykes of the TCU Horned Frogs looks on as TCU takes on the Iowa State Cyclones during the first half at Amon G. Carter Stadium on November 26, 2022 in Fort Worth, Texas. (Photo by Ron Jenkins/Getty Image

READ MORE: No. 3 TCU to play No. 2 Michigan in first-ever trip to College Football Playoff

Dykes, 53, is in his fourth stop after stints with Louisiana Tech, California and SMU. The Texan and son of longtime Texas Tech coach Spike Dykes, Sonny Dykes is 83-64 in 13 seasons as a head coach.

"It’s not always like this and I’ve been on both ends and so something like this probably means more to me than it might somebody," Dykes said. "I’ve been 1-11 and I’ve been fired. I’ve been kind of on top and then on bottom, too. I’m always thankful for those bad times because it really truly does make you appreciate the good times more."

Dykes moved across town to take over at TCU after being with rival SMU for five years. Playing against the Horned Frogs annually, he had a good idea of what kind of team he was getting.

Instead of a major roster overhaul of last season’s 5-7 TCU team, Dykes dipped into the transfer portal to fill some holes, but mostly took what he inherited and turned it into one of the best teams in the country.

The Horned Frogs started the season unranked and didn’t lose until dropping the Big 12 championship in overtime to Kansas State.

"We really had no expectations whatsoever when the year started," Dykes said. "We thought we had a chance to be pretty good, but we just gained confidence every week and we had some kids that really were tough and like to compete, and that made everything so much better."

Dykes is one of several head coaches in major college football right now who worked for Mike Leach early in his career. Leach died last week at 61 of complications from a heart condition. He was in his third season at Mississippi State after stints at Texas Tech and Washington State.

Dykes called Leach one of the most influential people in his career, second only to his father.