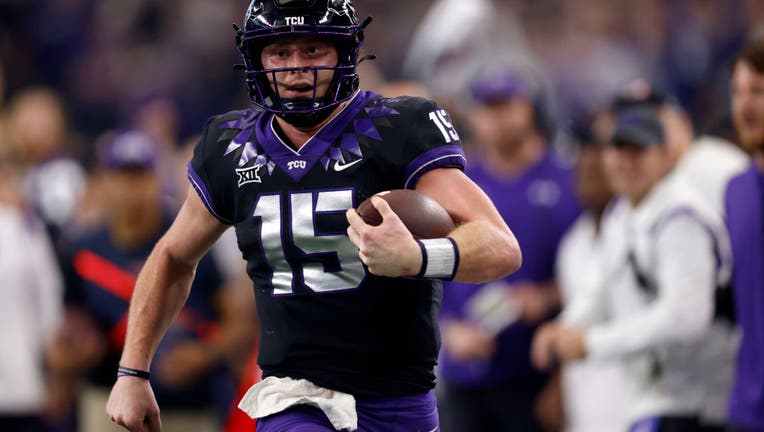 ARLINGTON, TX - DECEMBER 3: Max Duggan #15 of the TCU Horned Frogs carries the ball against the Kansas State Wildcats in the second half of the Big 12 Football Championship at AT&amp;T Stadium on December 3, 2022 in Arlington, Texas. Kansas State

Duggan finished behind USC's Caleb Williams, who won the award.

Stetson Bennett, of Georgia, and C.J. Stroud, of Ohio State were the other finalists.

RELATED: From backup QB to Heisman contender, Max Duggan is leading TCU on a historic season

Duggan willed TCU to its first CFP appearance with an inspiring performance in the Big 12 championship game against Kansas State.

Duggan, who had heart surgery two years ago, was at the center of one of the signature sequences of the season. It happened late in the fourth quarter when he broke loose for 40 yards and then, visibly out of breath, ran for an 8-yard TD and completed his 2-point pass to bring the Frogs back from an 11-point, fourth-quarter deficit. Duggan came up just short of the goal line on a run in overtime, and the Frogs lost for the first time this season, 31-28.

Duggan, a fourth-year player from Council Bluffs, Iowa, was Gary Patterson’s starter for two seasons before Dykes picked Chandler Morris over Duggan in the preseason. Duggan regained the job for the second game because of an injury to Morris and ended up leading the Big 12 in every major passing category.