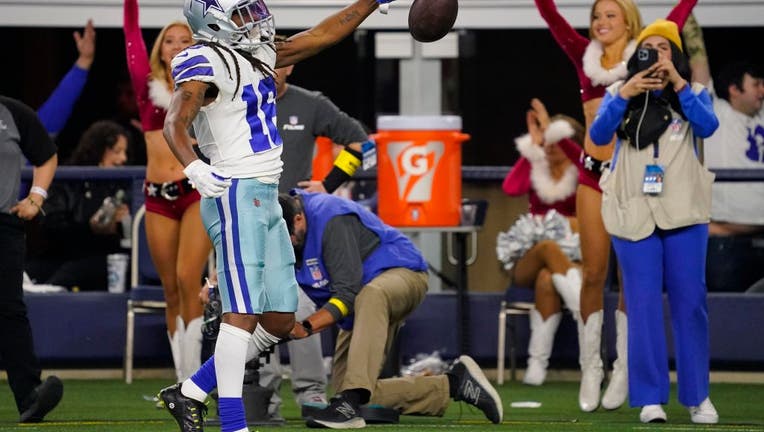 ARLINGTON, TEXAS - DECEMBER 24: T.Y. Hilton #16 of the Dallas Cowboys celebrates after catching a pass during the fourth quarter against the Philadelphia Eagles at AT&amp;T Stadium on December 24, 2022 in Arlington, Texas. (Photo by Sam Hodde/Get

NASHVILLE, Tenn. (AP) — The Dallas Cowboys and Tennessee Titans are desperately chasing division titles as the regular season winds to a close.

Their approach Thursday night may wind up being very different.

Dallas (11-4) still has some hope of a second straight NFC East title with the Cowboys needing to win their final two games with Philadelphia losing both of their final games.

The only way the Titans (7-8) can win a third consecutive AFC South title is by beating the Jaguars in Jacksonville in Week 18. So if coach Mike Vrabel wants to rest as many of his Titans as possible, that’s just fine with the Cowboys.

"If they want to roll us the ball a couple of times and let us go from there, I’m all for that," Dallas quarterback Dak Prescott said. "We’ll take it however they want to do it."

Dallas has won five of six, including a 10-point comeback last week for a 40-34 win to keep Philadelphia from clinching home-field advantage throughout the postseason in the NFC. Cowboys running back Ezekiel Elliott couldn’t agree more, even with a postseason berth already secure.

"We’re trying to build momentum for the playoffs," Elliott said.

Vrabel said trying to end the Titans’ five-game skid, their longest since 2015, won’t affect who plays or watches.

The banged-up Titans lead the NFL for a second straight year having used 82 different players, including 27 different starters on defense and a season-high 10 rookies last week. They’ll be without veteran quarterback Ryan Tannehill again with rookie Malik Willis getting his second consecutive start and fourth this season.

The Cowboys will look to win their second straight game against the struggling Titans.

How to watch: In Dallas, you can watch the game on FOX 4. If you're outside the DFW area, you can catch it on Amazon Prime. You can stream it on the NFL app and NFL Network. NFL rules prohibit FOX 4 from streaming the game so, as much as we'd LOVE to stream the games here, we can't. Sorry.