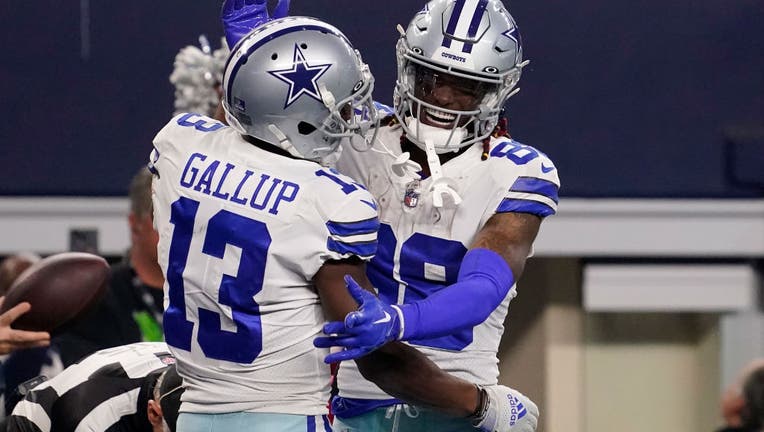 ARLINGTON, TEXAS - DECEMBER 24: Michael Gallup #13 of the Dallas Cowboys celebrates a touchdown with CeeDee Lamb #88 during the third quarter in the game against the Philadelphia Eagles at AT&amp;T Stadium on December 24, 2022 in Arlington, Texas

Gardner Minshew threw two scoring passes and had a TD run filling in for the injured Jalen Hurts, but his second interception set up Maher's go-ahead kick.

Four days after speaking at the memorial service of his college coach, Mike Leach, Minshew had Philadelphia 19 yards from a potential winning touchdown in the final seconds, but his desperation pass into the end zone on fourth-and-10 wasn't anywhere near a receiver.

The NFL-leading Eagles (13-2) had two turnovers in the final five minutes and missed a chance to clinch the NFC's top seed in a matchup of playoff-bound division rivals.

One Philadelphia victory or loss by Dallas (11-4) in the final two games would wrap up home-field advantage throughout the NFC playoffs for the Eagles.

The Eagles had plenty of chances to wrap everything up in this game, but instead had their five-game winning streak stopped. And they got off to a strong start when defensive end Josh Sweat snared an ill-advised throw by Prescott and ran 42 yards for a touchdown and an early 10-0 lead.

The Cowboys had to settle for Maher's fourth field goal after Miles Sanders fumbled on the first play of the Eagles' next possession.

Needing a touchdown to win, Minshew got the Eagles to the Dallas 19-yard line with a 22-yard completion to DeVonta Smith, who had two touchdown catches.

After spiking the ball to stop the clock, Minshew threw incomplete twice. He was never sacked against the league's No. 2 defense in sacks, but faced heavy pressure on the decisive play and had to chuck the ball deep.

Dallas won by the same score as an overtime loss at Jacksonville a week earlier. Despite that loss, the Cowboys clinched a playoff spot a few hours later when the New York Giants beat Washington.

Prescott had his first 300-yard game of the season, bouncing back from Sweat's interception on his third pass to go 27 of 35.

Minshew threw for 355 yards, completing 24 of 40 passes in his first start of the season after Hurts sprained his right shoulder in last week's win over Chicago.

Even though the Eagles had to play without their MVP candidate, they gave Minshew the day off Tuesday to speak at the service for Leach. The 61-year-old Mississippi State coach, who died of complications from a heart condition, was Minshew's coach at Washington State.

Lamb had 100 yards receiving in a half for the first time in his three-year career, finishing with 103 before the break on the way to 10 catches for 120 yards.

Smith had eight catches for 113 yards, and A.J. Brown added 103 yards on six grabs for Philly.

Eagles: CB Avonte Maddox (toe) and DT Jordan Davis (head) were ruled out after getting injured in the first half.

Cowboys: Rookie DE Sam Williams was inactive after being involved in a car wreck Thursday. Owner Jerry Jones said Friday on his radio show Williams was dealing with concussion symptoms.

Cowboys: Two road games before the playoffs, the first at skidding Tennessee on New Year's Day.

Follow below for updates on the game between the Dallas Cowboys and Philadelphia Eagles. Mobile users click here.