Two North Texas women want the public to be on high alert the next time they go grocery shopping.

DALLAS - Two North Texas women want the public to be on high alert the next time they go grocery shopping.

Each of them had thousands worth of goods stolen from them in the same parking lot. One of the crimes was even caught on camera.

Dashcam video shows Cindi Caudle get robbed while doing something she's done a million times before. She set her purse in the passenger seat as she loaded her car during a recent trip to the Costco on Churchill Way in Dallas.

"I always try and park in a less congested area, which was a mistake because that set me up as a sitting duck," she said.

Video shows a vehicle back into the spot next to Caudle and then crack open their door as soon as she turned her back. She then opened a second door as she loaded groceries, totally unaware she was creating a shield for the robbers.

The robber got out of his car, grabbed Caudle’s purse and was gone in 10 seconds. 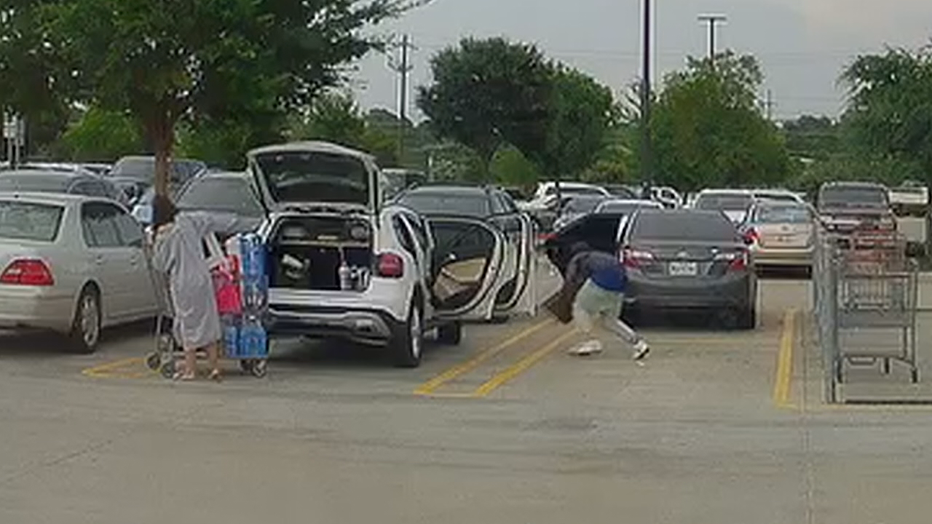 All of it was captured on dashcam by a man who happened to be parked nearby.

"The guy behind me was parked facing forward," Caudle said. "He was screaming at me, ‘Ma’am! Ma’am! You’re getting robbed.’"

The robbers got away with more than $7,000 worth of stuff.

Meantime, in the same parking lot on a different day, Fran Mottern was loading up her SUV with food for the Austin Street Shelter. She says she turned from her car to walk a short distance to return her cart and then her purse was gone.

Unlike in Caudle’s case, all of Mottern’s doors were shut. But it didn't matter. According to the police report, the thieves stole her purse, including her credit cards.

"They had already tried to use my credit cards within 20 minutes. Three times at Target," Mottern said. "They have my driver’s license with my address and the key to my front door."

Two women and two crimes with one expensive lesson.

The opportunity here is for all shoppers to remember to be vigilant and watch your surroundings. Neither of these women knew they had been robbed until after the thieves were gone.

The Dallas Police Department says it is actively investigating both of the crimes. They say it’s always a good idea to carry fewer valuables and even inventory what’s in your handbag in case you ever need to report what's missing.