Tailgaters were outside, and more than 21,000 fans attended Cowboys home opener at AT&amp;T Stadium Sunday

Tailgating lots outside AT&amp;T Stadium on Sunday hosted a noticeably thinner crowd than usual thanks to this year’s new safety precautions.

ARLINGTON, Texas - Tailgating lots outside AT&T Stadium on Sunday hosted a noticeably thinner crowd than usual thanks to this year’s new safety precautions.

With the small crowds, it was much different than a normal game day for Cowboys fans.

But fans were just happy they even got to attend the game and watch it live in-person. 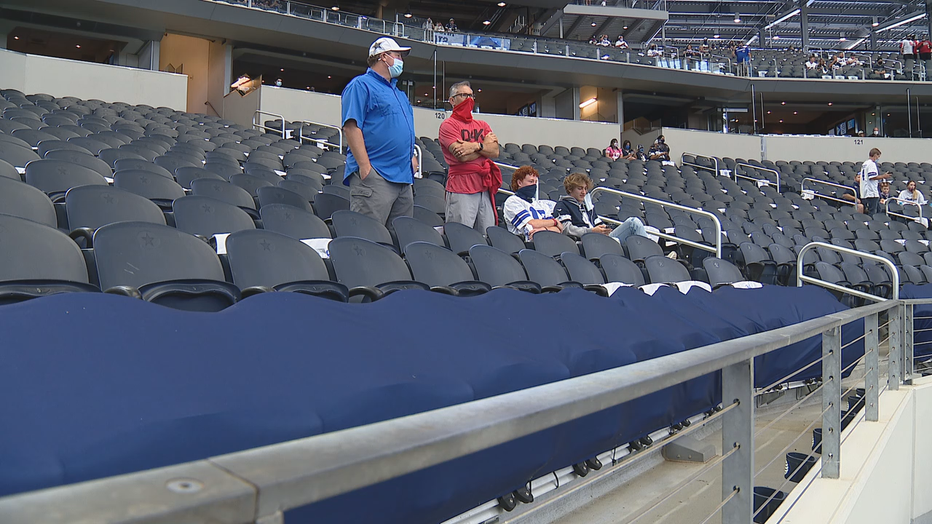 It was a different kind of environment outside AT&T Stadium than fans would normally expect to see for the first Cowboys home game of the season.

“Normally it would be packed, just filled up with people walking around, partying, having a good time. But as you can see right now, it’s pretty empty and that’s unusual,” Jose Ramirez said.

Ramirez usually gets there early on game days to get a good tailgating spot.

“I was surprised, not going to lie,” he added. “A lot of time we get here at 5:30, this is already some of the spots are already taken. We got here this morning, we pretty much were the first ones here.”

This year does look different than in years past.

In the tailgating lots, every other spot was blocked off to promote physical distancing.

Inside, fans were required to wear masks and sit in seat blocks distanced from other parties.

“It’ll be a little different, but I think the fans are going to make up for it, because this is the first game at home,” Robert Haynes said.

There are also cashless transactions and mobile-only ticket entry, and the side doors were open to allow for more open air flow.

“I think it’ll be strange with fewer fans in attendance than usual, but I’m excited to be able to go at least,” Bradley Greiner said. “I’m glad they’re letting us spread out a little bit, I think that’ll be adequate safety precautions, looks like they’ve got the doors open. It’ll be a little bit of an outdoor environment.”

But regardless, fans are just happy they got to watch in-person.

“I think, right now, we’re just all excited that football season is back, and I think everyone just wants to come out here and root for their team,” Shari Morris said.

“We’re excited to have live football here, it’s so uncertain this year,” Eric Calhoun said. “Hope it all holds together and they can make it through a whole season this way.”

Next week, the Cowboys travel to Seattle, where no fans will be in attendance.