Southwest Airlines cancelations have some opting to drive cross country

Southwest Airlines apologized to fliers and staff after having to cancel nearly 70% of their scheduled flights Monday. Many travelers are being told they cannot rebook until Thursday or Friday.

DALLAS - There are a lot of frustrated travelers at Dallas Love Field and Dallas-Fort Worth International Airport on Monday.

Many people just trying to get home from a holiday trip are struggling to get flights back home after severe weather led to many canceled flights and flight crews out of position.

"When everything is out of control it is hectic and crazy and everyone is frustrated and angry at each other," said Sarah Bryant, a stranded passenger.

The Bryant family was trying to get to Cancun on Spirit Airlines. Their flight got canceled after they already check their bags and went through security. 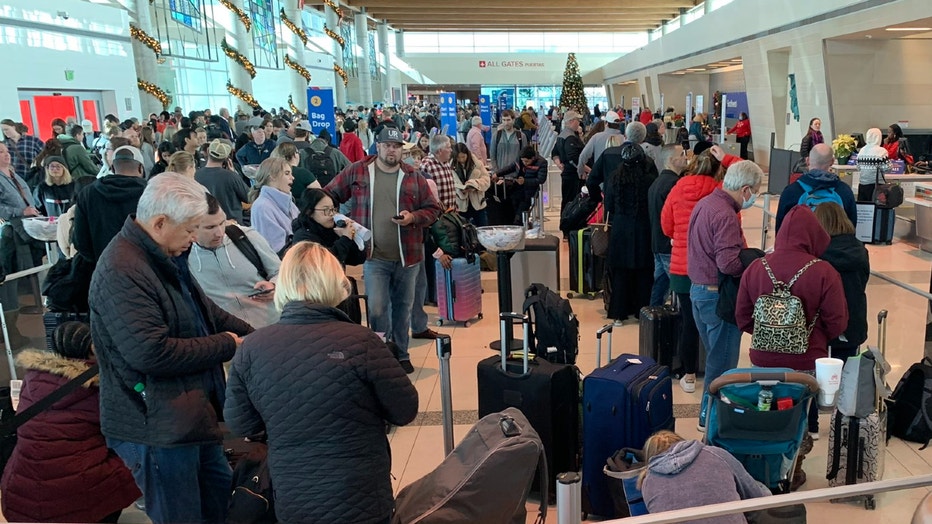 And they aren't alone.

"I try to find out where the flight is coming from. I don't get an answer," said Randy Rohmfeld.

"So I guess we get to go home and this was our kid's Christmas present," said Michelle Rohmfeld.

Airlines say cancelations nationwide are due in large part to effects of the massive winter storm that impacted major cities from the Pacific Northwest to the east coast, grounding flights and leaving planes and crews out of position.

Flight tracking website FlightAware says as of 4:30 p.m. 2,747 Southwest flights were canceled Monday. That's nearly 70 percent of its total flights for the day and by far the most for any airline.

At Love Field along there have been 290 flights canceled in and out of with 67 delays.

Over the last two days Dallas-based Southwest Airlines has canceled more flights that any other airline in the country.

On Sunday, Southwest Airlines canceled 20 percent of its flights from Love Field.

The two days before that, Friday and Saturday, Southwest canceled around 30 percent of its flights.

More than 295 Southwest flights were canceled out of Dallas Love Field on Tuesday and more than 2855 were canceled nationwide on Monday. The Dallas-based airline blames disruptions from winter weather for putting flight crews out of place.

Many passengers spent the night at the airport hoping today would be better.

FOX 4 cameras spotted people spending the night in the terminal, and luggage piling up.

"As long as we get there is all that matters, so we're going to make the best of the situation," said Susan Bryant.

At Love Field passengers waited in line for some two hours to talk to someone at Southwest Airlines ticket counter. 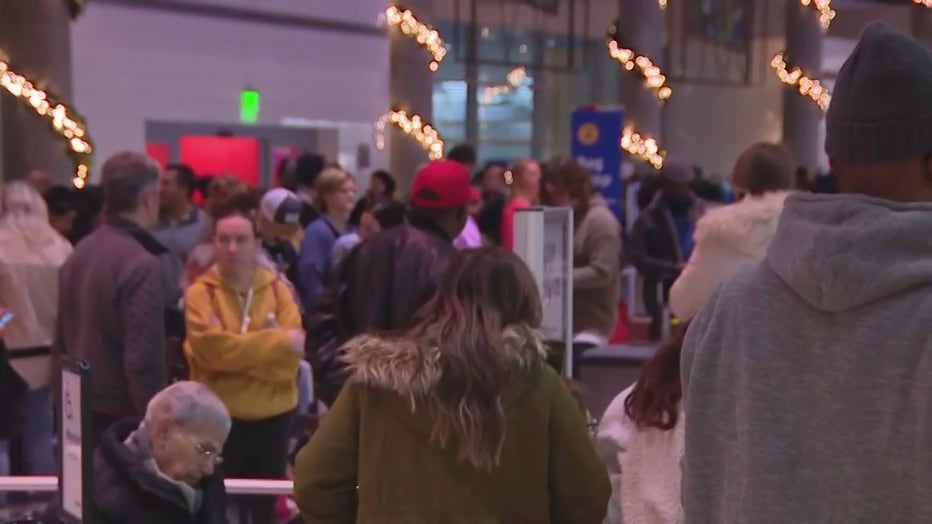 "I get here, and I find out through the kiosk that I've been canceled. Why couldn't they let me know before I was dropped off at this airport?" said Linda Burns.

The line at the Southwest Airlines baggage claim counter was even longer.

"They're trying their best out here, but 4 hours is a little too long."

Folks said it felt like a scavenger hunt trying to find their luggage among the masses.

"So the bags made it, my son didn't. But luckily I came in and was able to find them," said Garrett Hindsley.

READ MORE: Nearly 3,000 US flights canceled on day after Christmas

FOX 4 spoke to one woman who is trying to get back to Southern California after taking a trip to Florida.

She was about to board an already delayed flight at 11 p.m.

Edmond Kincaid and his two children slept in the terminal last night trying to catch a flight home to San Antonio. Now he's giving up.

Dawn Rodriguez was supposed to fly into Love Field from Orlando, but her flight got canceled on Christmas Eve.

She decided to rent a car instead of waiting several days for the next available flight back home.

"So we're here now to pick up our luggage and go home," said Dawn Rodriguez.

Rodriguez wasn't the only one.

Stephanie Mattison and her family had their flight from Dallas to Salt Lake City canceled Christmas evening, so they ditched their bags and decided to drive 17 hours.

Their next available flight would have been Thursday.

"That doesn't do any good. Thursday?! Like, that rulingsthe entire vacation," Mattison said.

Tara Hooper was stuck in California so she borrowed her counsin's car and now is driving 19 hours cross country to North Texas.

Hooper sent us photos of the San Diego Airport showing a sea of bags and frustrated passengers.

Images that are identical inside Love Field.

"They were actually apologizing to us at how bad operationally things were going," said Hooper.

The president of the union that represents Southwest Airlines flight attendants blasted the airline today.

Lynn Montgomery says the carrier has failed to modernize technology.

Montgomery says flight attendants have been setting up cots.

"With Winter Storm Elliott our system got over tasked and the system we have could not handle the number of cancelations, changes and notifications that needed to go out. It created a huge impact and chaotic conditions for passengers and flight attendants across the nation for Southwest Airlines today," she said.

With consecutive days of extreme winter weather across our network behind us, continuing challenges are impacting our Customers and Employees in a significant way that is unacceptable.
And our heartfelt apologies for this are just beginning.
We’re working with Safety at the forefront to urgently address wide-scale disruption by rebalancing the airline and repositioning Crews and our fleet ultimately to best serve all who plan to travel with us.
We were fully staffed and prepared for the approaching holiday weekend when the severe weather swept across the continent, where Southwest is the largest carrier in 23 of the top 25 travel markets in the U.S. These operational conditions forced daily changes to our flight schedule at a volume and magnitude that still has the tools our teams use to recover the airline operating at capacity.
This safety-first work is intentional, ongoing, and necessary to return to normal reliability, one that minimizes last-minute inconveniences. We anticipate additional changes with an already reduced level of flights as we approach the coming New Year holiday travel period. And we’re working to reach to Customers whose travel plans will change with specific information and their available options.
Our Employees and Crews scheduled to work this holiday season are showing up in every single way. We are beyond grateful for that. Our shared goal is to take care of every single Customer with the Hospitality and Heart for which we’re known.
On the other side of this, we’ll work to make things right for those we’ve let down, including our Employees.
With no concern higher than ultimate Safety, the People of Southwest share a goal to take care of each and every Customer. We recognize falling short and sincerely apologize.

Southwest Airlines says it is trying to re-book passengers as quickly as possible.

Southwest says those whose flights have been canceled may request a full refund or receive a flight credit, which does not expire.

FlightAware says more than 2,000 Southwest flights have already been canceled for Tuesday.