First responders were busy Saturday helping cut off water at North Texas homes and businesses where pipes have burst.

DALLAS - Thawing out from the arctic blast has a way of revealing just how cold it got.

First responders were busy Saturday helping cut off water at homes and businesses where pipes have burst.

It had some people out of their homes for the holidays.

Saturday was a slight relief, with temperatures teetering above freezing.

But some people across North Texas had to scramble to save what they could due to burst pipes, which affected plans and living arrangements during Christmas and the arctic blast.

"The damage started right here and it was dripping down," Stephen Glowicz said.

Glowicz was faced with flowing water into his Dallas apartment for hours early Christmas Eve morning.

He and his wife were headed to bed, ready for the holiday weekend.

Now, the Dallas couple will likely spend Christmas in a hotel once they clean up what they can.

"It also went out of this bedroom and flooded our bathroom," Glowicz added. 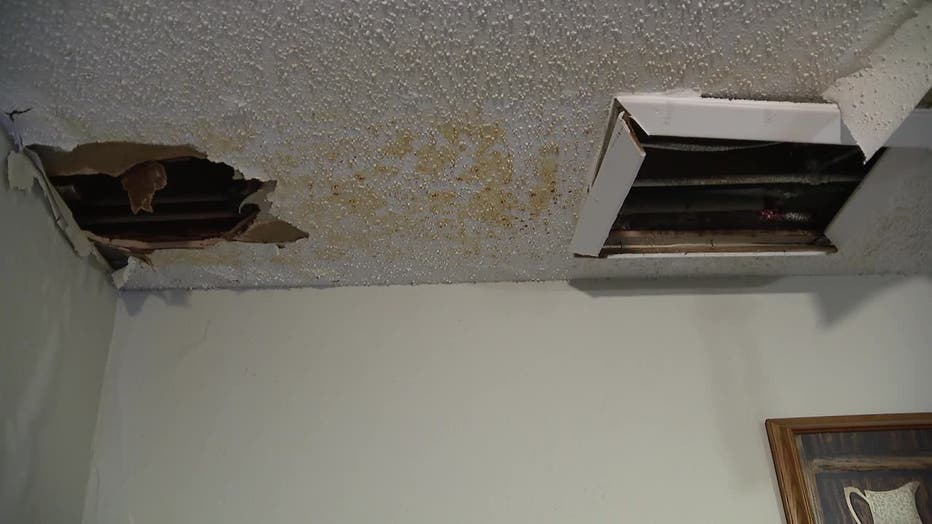 Inches of water spread to the entire apartment and even into next door units.

"I noticed it was streaming water from this right here, the cutout," Glowicz said.

Glowicz said a pipe burst above his apartment, starting as a stream, then turning into a flood, leaving gaping holes in his ceiling.

Below the holes sits his soaked bed.

But Glowicz has had little sleep, calling apartment management, maintenance, and Dallas Fire-Rescue.

"I am probably not the only person who has had this problem," he said.

READ MORE: Areas of North Texas having issues with natural gas due to arctic blast

In Tarrant County, one woman sent FOX 4 video from inside her flooded apartment in Haslet.

She lives with her two children and their dog.

Management moved the family into an empty apartment until their apartment can be assessed.

"It’s quite a mess now that will all have to be fixed up," Glowicz said.

Glowicz is grappling with the same problem.

Thankfully, he has renter’s insurance, but is still forced to wait for answers on what is next.

"It’s hard to put into words how much work what we put into this apartment," he said.

As we continue to thaw out from the freezing temperatures, there will likely be more burst pipes that first responders and North Texans have to deal with.