Denton and Arlington ISD have both canceled some classes for next week so repairs can be made to damaged buildings.

DENTON, Texas - Denton and Arlington ISD have both canceled some classes for next week so repairs can be made to damaged buildings.

The aftermath from this week's subfreezing weather and storms even forced Dallas ISD to call off Friday's curbside meal distribution.

School districts are having to pivot again as the weather starts to warm up causing additional problems at many campuses.

Four of the biggest school districts are making updates to their schedules now and into the weekend.

Giant dryers were brought into Harpool Middle School in Denton County Friday to help mitigate some of the severe water damage. 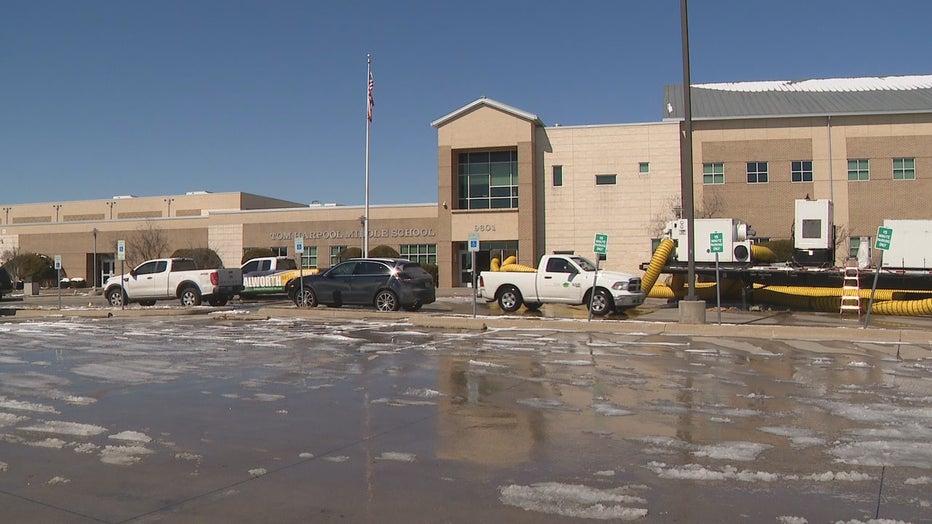 Harpool Middle School got the worst of it. All students there will transition to online learning come Wednesday.

"What we're prepared to do is give our teachers two days to relocate to the upstairs classroom and then deliver remote instruction up until spring break," Dr. Wilson said.

"We just take it day by day try to keep them calm," she said

The Arlington ISD has decided to cancel all classes Monday and Tuesday after burst pipes damaged several of its buildings.

The district plans to resume remote learning on Wednesday. The hope is many schools will reopen for in-person learning Thursday.

Fort Worth ISD also canceled all classes on Monday and Tuesday. Students and teachers will stay home, but the district will ask other employees to help assess the damage.

Dallas ISD has not announced its plan for classes next week yet, but the district did say curbside meal distribution that was canceled for Friday will be rescheduled for Monday. Location to be determined.

"Once we're able to determine which ones are able to support food distribution, we will make an announcement as quickly as possible," said Michael Rosenberger with Dallas ISD.

A critical service in a district where 90% of students qualify for free or reduced-cost meals.

"By early Monday, we will have the trucks rolling and we will have food supplied to every school we're able to open for distribution," Rosenberger said.

A Dallas ISD spokesperson says the hope is to make an announcement about the class schedule by Saturday. They will post the information on their website and on social media.

Denton ISD says it will update its website at 5 p.m. daily.