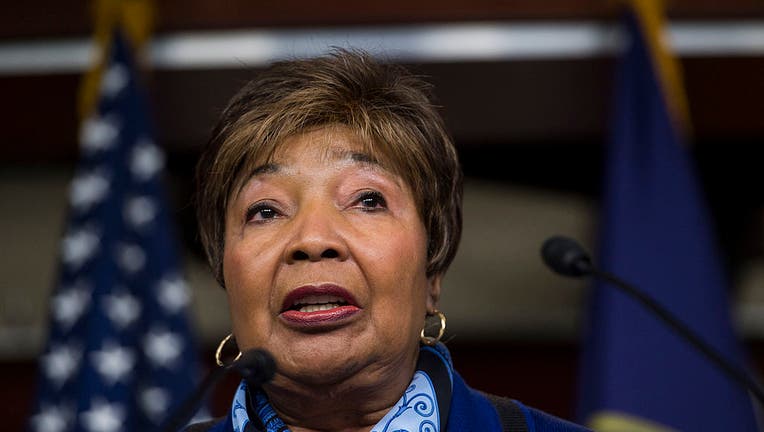 DALLAS - A rare occurrence is unfolding this primary season across South Dallas: Candidates are actually campaigning for Congress.

U.S. Rep. Eddie Bernice Johnson has been so politically dominant that for decades, few serious Democrats have dared to challenge her. But late last year, the Dallas powerbroker announced she would retire, unleashing a burst of young political talent who are blitzing the district in their bids to succeed her.

Texas’ 30th Congressional District has never known any federal representative except Johnson — after all, she helped draw the district as a state legislator in the early 1990s. Now the dean of the Texas Congressional delegation, the 85-year-old will retire next year and hand over the duties of the district to a new generation.

It is all but certain whoever wins the Democratic nomination either in March or in the May runoff will easily carry this heavily Democratic district in the fall general election. The district is predominantly Black, as are most of the leading Democratic candidates.

Johnson did not make her retirement official until November, setting off an abridged scramble to set up campaigns ahead of the December filing deadline but attracting a packed lineup of experienced candidates who are either well connected, well known or well funded.

The presumptive frontrunner is freshman state Rep. Jasmine Crockett, a Dallas-based attorney who sprang to prominence last summer as a spokesperson on national television for the House Democratic Caucus when the state legislators temporarily relocated to Washington, D.C., to fight the GOP’s voting bill.

From that experience, Crockett gained the largest social media presence and political profile, and she said it was then that party elders began to recruit her for a potential Congressional run.

Among the crowd, Crockett enjoys a key advantage: the coveted Johnson endorsement.

"I sought her out"

Johnson told The Texas Tribune that she recruited Crockett for a run.

"She didn’t seek me out," Johnson said. "I sought her out because I was not pleased with the people that were lining up."

The pair of women did not know each other well until last year’s round of redistricting, the decennial process in which state lawmakers redraw political maps to reflect census changes.

Johnson is a former state legislator and was intimately involved in the drawing of this district back when she was a state senator in 1991. Last year, Crockett reached out to Johnson as a state legislator who shared parts of Dallas with the congressional district in order to discuss how to best advocate for the federal district among state lawmakers.

Through that experience, Crockett stayed in close touch with Johnson — often with calls from the state House floor — and Crockett quickly learned that Johnson was avidly monitoring the redraw through livestreams and by keeping up with the political intelligence. 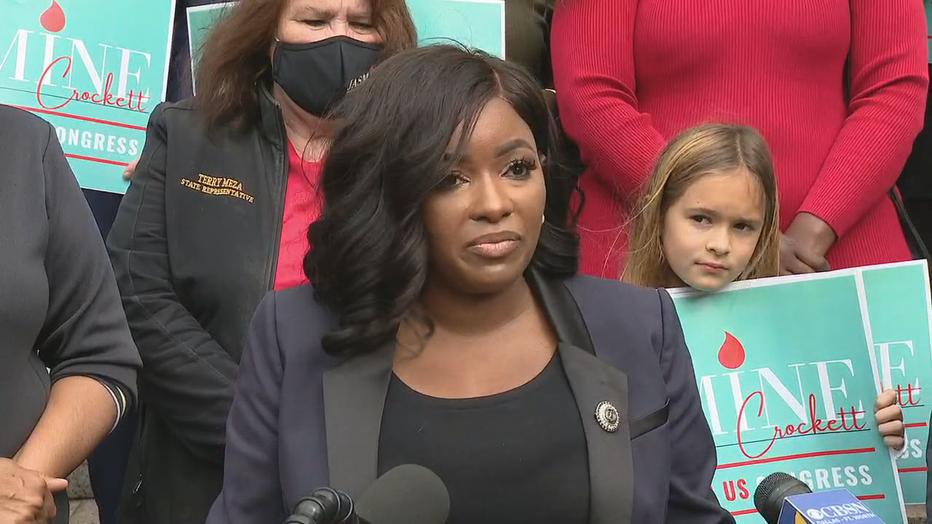 The new 30th District saw few changes from its old version. It encompasses many of the Dallas landmark highlights: downtown, the train station named for Johnson, Love Field, the Cotton Bowl and Fair Park, Deep Ellum, suburbs like Cedar Park and De Soto, plus a new small sliver of Tarrant County to the west.

"You did well, you did really, really well, and I want you to know I’m proud of you," Crockett recalled Johnson telling her.

The day before Johnson announced her retirement, she texted Crockett while en route home from Washington, curious if the state legislator had filed to run for reelection in the state House. Crockett had not, but within days, Crockett was a candidate for Congress.

"She absolutely wanted somebody who’s young, female, someone who had actually served in an elected capacity," Crockett recounted of the congresswoman’s wishes.

But Crockett’s emergent status as a frontrunner has also made her a target among her competitors. A video surfaced earlier this month showing Crockett characterizing Johnson as an entrenched career politician.

"We have a congresswoman here in Texas, a U.S. Congresswoman who has been in that seat for 28 years," Crockett said in a 2020 livestream called Barbershop Conversations. "Ever since they created that seat, she’s been in that seat. … She has been an elected official for 47 years. By education, she is an RN. Somehow, she is a multimillionaire."

Johnson said she suspected the person responsible for drawing attention to the video was an opponent of Crockett’s who is "very far behind in the polls."

"I consider it an act of desperation to dig up different statements and mesh them in to make it say what they say what they wanted it to say and to bash me," she said, adding that it did not change her support for Crockett.

Crockett brushed off the incident, explaining she did not initially remember the video and called it "much ado about nothing."

"I’m not a good politician, that’s the bottom line," Crockett said of the incident, adding that it showed running for Congress this cycle was "never part of my plan" and that the endorsement competition was not "about who can kiss up" to Johnson the most.

Crockett said the comments came because she was defending President Joe Biden for shepherding the 1994 Crime Bill that has since become anathema in many progressive circles.

Her point, she said, was to explain that other politicians these supporters back, like Johnson, also backed the crime bill and have not recanted that vote.

"I was trying to draw out how ridiculous it was," Crockett said.

Outside of Johnson, the endorsement watch of this race has been a curious development: The Dallas political establishment is splintered.

"It’s not that big of a deal," U.S. Rep. Marc Veasey, a Fort Worth-based Democrat, said of the competing rivalries. Veasey is backing Hamilton, who used to be a staffer for him. "We’re accustomed, especially with something like this where there was going to be a lot of people running, that there was obviously going to have people who were friends who would have differences of opinion on who should take this seat."

"This is going to be a name ID race, and it’s important for me to get my name in as many living rooms as possible," Mulugheta said. 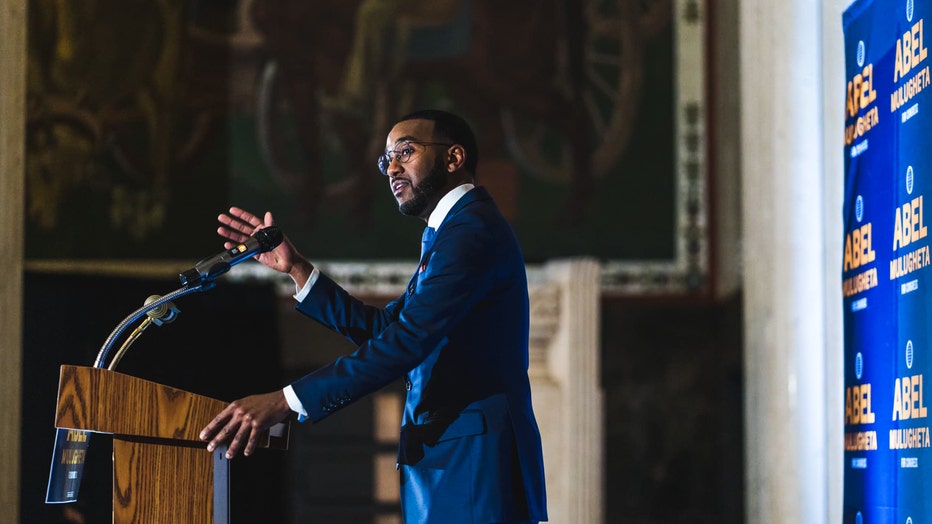 Mulugheta, like several other Democratic candidates, said he raised more than six figures in the abridged fundraising period between Johnson’s retirement and the end of the fourth-quarter reporting period.

Hamilton initially launched her candidacy contingent that Johnson retire. Had Johnson run for a 16th term, Hamilton would not have challenged her.

Hamilton has never been on a Dallas ballot, but she is well known to Texas Democrats. She came up in the powerful circle that grew out of former U.S. Rep. Martin Frost’s political team. Hamilton has worked on numerous campaigns in the region, first with Veasey and then she served as Biden’s lead staffer both in the 2020 Democratic primary which helped deliver him the nomination and in the general election as interest in Texas’ competitiveness grew.

"This race is not predetermined," Hamilton said. "It’s going to be determined by the candidate who works the hardest and gets out their supporters. And I’m experienced doing just that."

Johnson told the Tribune that Hamilton unsuccessfully courted her endorsement.

"She indicated to people I would probably endorse her," Johnson said. "I never said I would, and I never said I wouldn’t, but I told her, I said, ‘Now, I am looking for someone who will convince me they will focus on the work that’s inside in this position, not just the title.’"

"And I made that clear with everyone I talked with. ... And I didn’t find that in anybody I was looking at [before Crockett], and I wanted it to be a woman," she added.

In response, Hamilton stressed her work in the district for decades and touted endorsements from grassroots organizers, local officials and federal lawmakers.

"I sought the counsel of Congresswoman Johnson, along with many other elected officials," Hamilton said in a statement to the Tribune. "In this case, North Texas trusted leaders who often align with her, have instead chosen to endorse me. I look forward to continuing my service in North Texas as the next Member of Congress representing Congressional District 30." 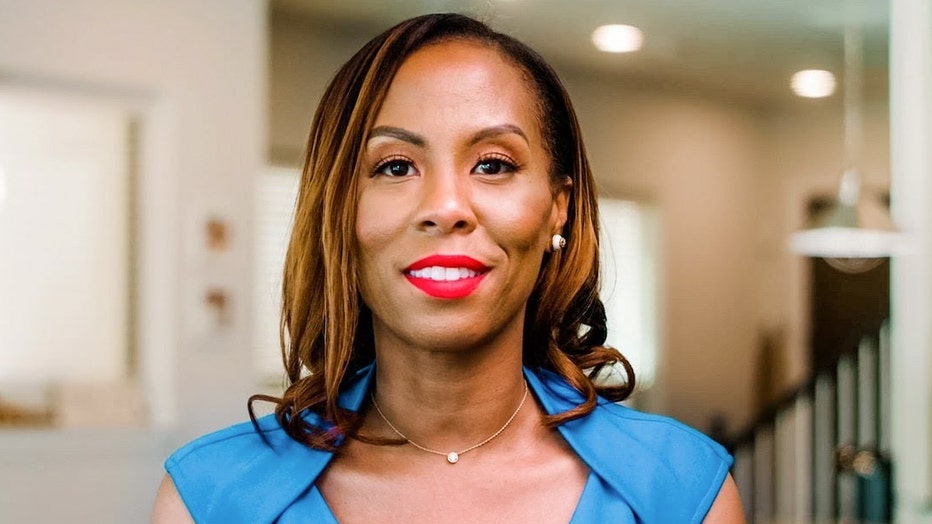 Tactically, this primary election is a ground war.

It is unlikely candidates will have the money necessary for a robust television campaign. As such, this primary will be fought in the field game and via digital outreach and direct mail.

Veasey said the candidates will win votes "the old-fashioned way, just getting out there, knocking on doors."

Crockett said she’s "not the biggest fan" of spending on television and described campaigning in the field as "a happy space for me."

But, she added, "If we’ve got the money, there’s nothing we won’t do."

So much so, she told the Tribune she thinks she might be able to avoid a runoff. That is unusual in primaries with this many candidates. If no contender is able to capture a majority of the vote on March 1, the top two candidates would advance to a May 24 runoff.

This district was drawn — and redrawn — to be a safe Democratic stronghold. Given that Johnson regularly cruised to reelection by a 60-point margin, it is unlikely that the Republican and third-party contenders — including Republicans Lizbeth Diaz, Kelvin Goodwin-Castillo, J. Frank Harris, Kinya Jefferson, Angeigh J. Roc'Ellerpitts, James Rodgers; Libertarian Phil Gray, and independent candidates Zachary Manning and Eric Williams, will have much of a shot in the general election.

"There’s a lot of experience and political know-how within this field right now," she said. "There are a number of people who can be amazing, amazing congresspeople."

Patrick Svitek contributed to this report.

U.S. Rep. Eddie Bernice Johnson announced Saturday that she is not running for re-election and will retire after her current term.