Rally held in Grapevine to show support for those in Ukraine

A rally in support of Ukraine drew a large crowd Sunday afternoon in downtown Grapevine.

Many Ukrainians who attended haven't had contact with their loved ones for weeks, as they shelter and are low on food and no electricity.

"I haven’t heard from them since March 1," said Anna Burman, who has family in Mariupol.

Sunday morning, Burman received a message she’s been waiting for: a text from her mother that she’s alive.

"I am very happy because the whole city is very bombed," Burman said.

Her family is in Mariupol, Ukraine’s key port city under Russian attack.

Over the weekend, Ukraine’s president called the siege of Mariupol terror that will be remembered for centuries to come.

"She said, ‘We had to drink rusty water from the tubes for 20 days,’" Burman said. "No food. It was very cold. They had to sleep under the streets in shelters."

As Burman continues to watch the devastation from here in North Texas, she stood in the middle of a large crowd in downtown Grapevine Sunday afternoon.

The majority of them have Ukrainian loved ones still trapped in the war zone. 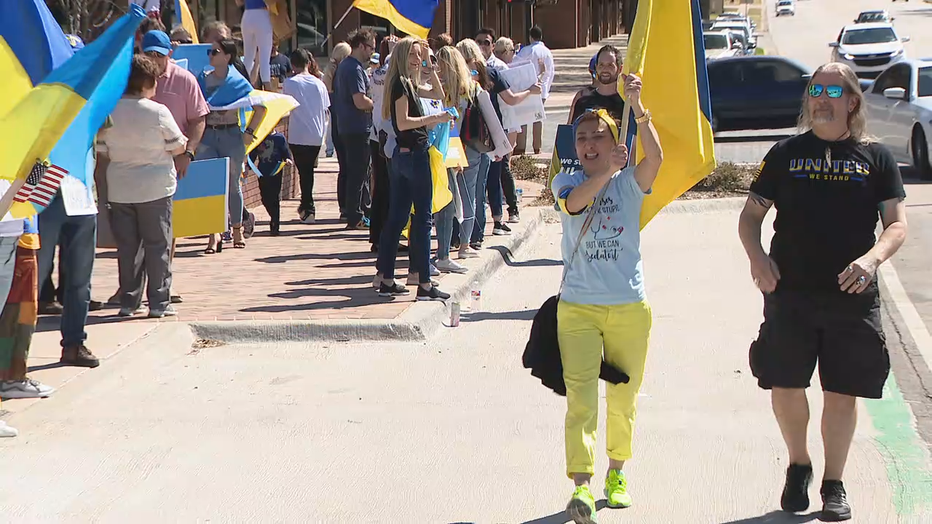 All in attendance wanted to show support for the country and those trying to survive there as the Russian invasion pushes past the three-week mark.

"I want people to see us and to know the war is not over," said Oleksandra Donnelly, who if from Kyiv.

Some of Donnelly’s family in Kyiv escaped to western Ukraine, but her parents decided to stay in the capital city.

Now she says it’s too risky for them to even walk to a bomb shelter.

"I don’t fall asleep until I hear from my dad," she said. "And because of the time difference, I wait until a call from him. I call him every single day, multiple times a day."

"I am so glad I was adopted, and I am so thankful to my parents," the 17-year-old said.

She only moved to North Texas four months ago when she was adopted.

"I don’t know what I would do now if I was in Ukraine.