Fair Park revealed images of major planned renovations it is expected to be paid for by a proposition okayed by Dallas voters.

DALLAS - Fair Park revealed images of major planned renovations, including an overhaul of the Cotton Bowl.

The classic stadium is just one of six projects planned after Dallas voters passed Proposition A in November. The bill is expected to raise $300 million toward revitalizing Fair Park. 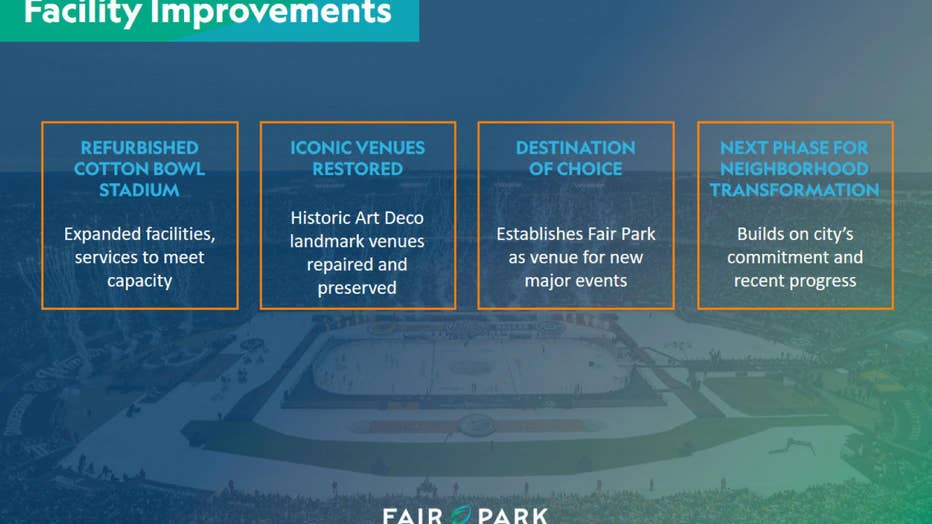 "We've shown, for example, that the Cotton Bowl can directly compete with other major stadiums around the state," said Brian Luallen Chair of the Fair Park Board of Directors. "Unfortunately, the visitor experience does not hold up to the incredible history of that venue."

Fair Park First brought in Overland Partners to help move the redevelopment forward. Brian Trubey, who previously did work on the American Airlines Center and AT&T Stadium, will lead the project. 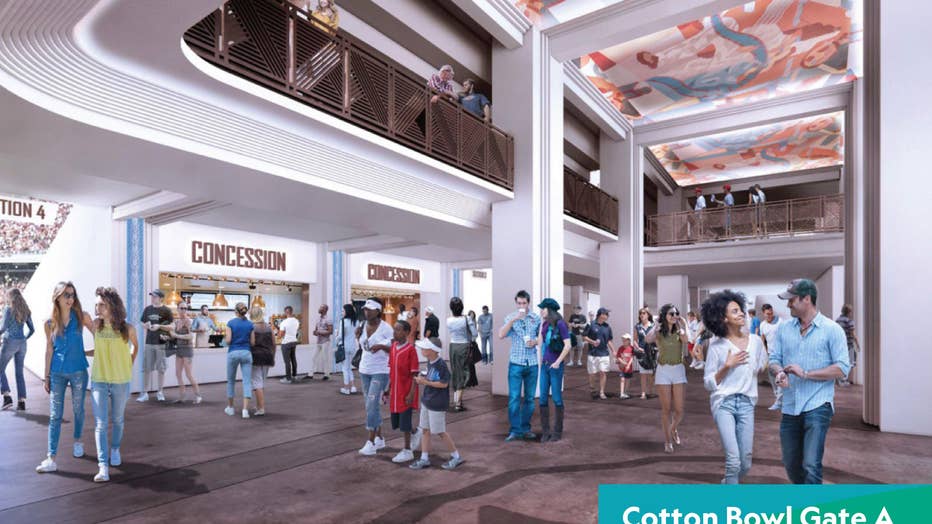 Luallen says the plans will make it easier and faster to get into and out of the Cotton Bowl.

Restrooms will be added, and it will all be done while meeting the standards for historic places.

"Here you see a page out of George Dahl's handbook for the original designs of the park and incorporating art deco-inspired imagery in a way that creates place-making inside the Cotton Bowl, but also improvements to vertical circulation that allow us to expand the historic concourses in a respectful way," he said. 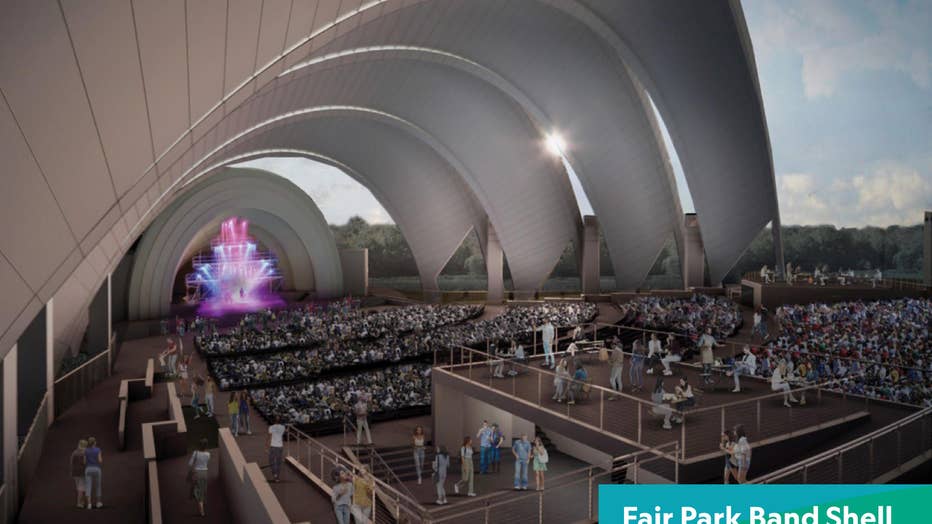 "During the height of pandemic, when arts and culture organizations partnered with OAC and were clamoring for outdoor venues, unfortunately we could not give this venue away for free," he said. "The smell of mold and mildew was so pungent."

Among the plans, more seating and cover from the sun and rain. 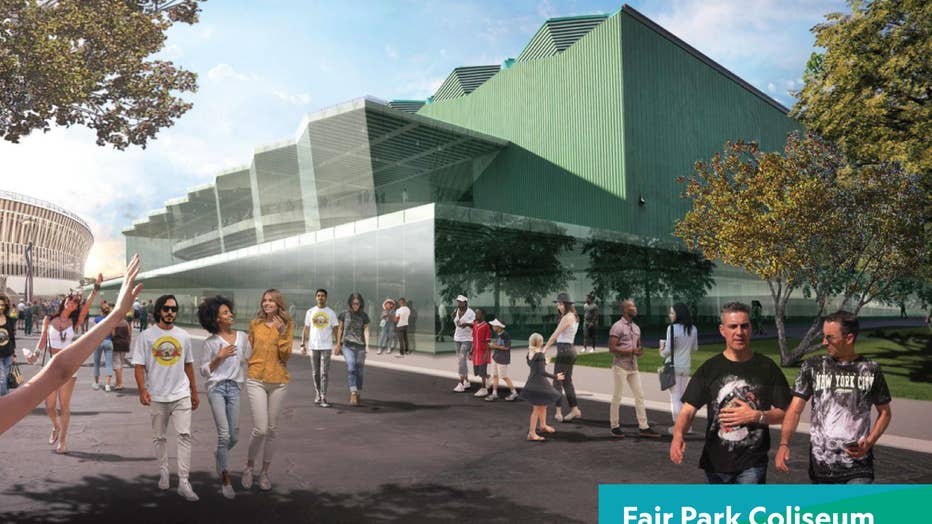 The Fair Park Coliseum recently received $14 million from the city.

"It made the building functional, but not good," Luallen said.

The new plans will bring it into ADA compliance as well as improve the layout, and add to its seating capacity for concerts. It's already booked for a big event. 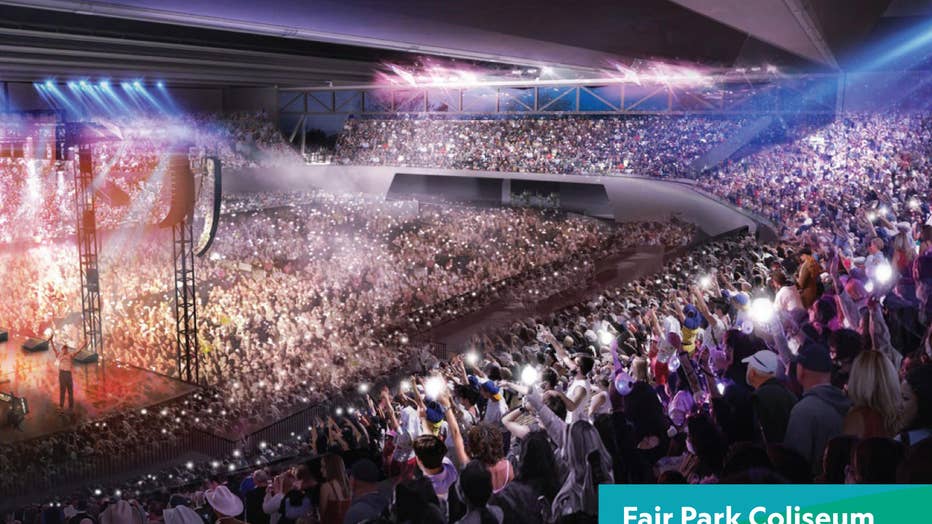 "Professional women's basketball, this year being televised on FOX Sports channels, over 800 million media impressions for their season," Luallen added.

The most important project, which can't be funded through the recently approved tax proposition, is Community Park.

Private funds are still being raised, but groundbreaking is expected to happen on the Community Park Complex in Nov. 2023.

"This has been promised since over 300 minority homes were taken from the surrounding community through eminent domain," Lullen said.

The Fair Park board says the park is a product of many meetings to find out what the community wanted.

There are also plans to restore artwork in the area.

Luallen says they expect to uncover art that was painted over when Fair Park served as a troop training site during World War II.