The head of the Texas DMV believes his agency has come up with a solution, but the Grand Prairie police chief expressed his concerns.

Law enforcement officers from departments across the state testified about the problem with fake paper plates. One cop said they busted a ring printing them off in a parking lot in Austin.

The head of the Texas DMV believes his agency has come up with a solution with a redesign of the tags, but the Grand Prairie police chief expressed his concerns.

Grand Prairie Police Chief Daniel Scesney testified before the Senate Committee on Criminal Justice in Austin Friday. He wants state lawmakers to do more to combat the problem of fraudulent paper plates. 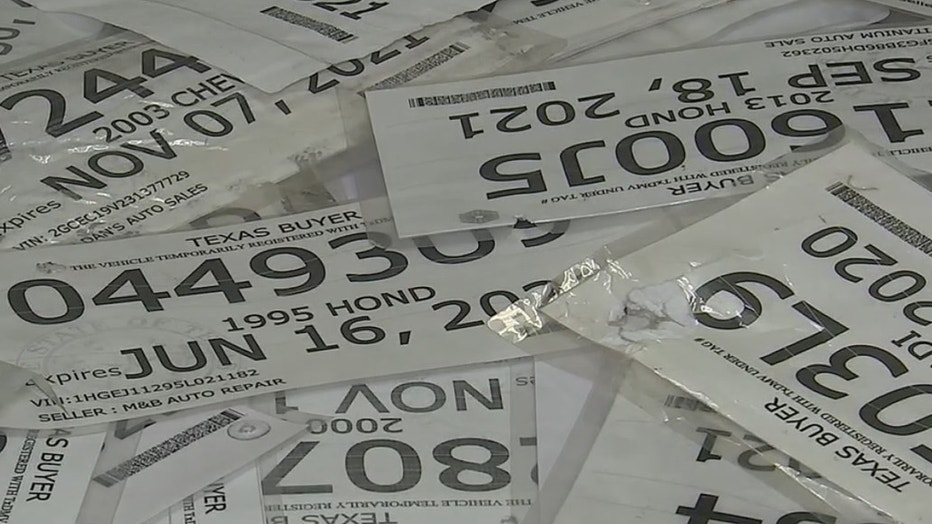 'It cost a cop his life': Police chief rails against fake paper license plates in Texas

"Just on the way down here today, I saw half a dozen paper tags," he said.

Last month, Officer Tsai died while pursuing a silver Chevy Malibu with a fake paper tag. He lost control of his squad car and crashed into a utility pole.

At the time, Chief Scesney said that same fictitious tag had been swapped to different vehicles at least 200 times.

"Anybody with a computer and a printer can make a tag," he said.

Law enforcement officers from departments across the state testified about the problem with fake paper plates. One cop said they busted a ring printing them off in a parking lot in Austin. The head of the Texas DMV believes his agency has come up with a solution, but the Grand Prairie police chief expressed his concerns.

Scesney's testimony comes on the same day that state-licensed car dealers are required to begin issuing redesigned paper tags from the Texas DMV. The agency noted that certain security elements were modified so they cannot be digitally replicated.

"The department has received understandable criticism in the past for not moving quickly," he said.

In 2021, officials estimated at least 1.8 million fraudulent paper plates were on the roads in Texas. The Texas DMV expects the new-and-improved design to drastically reduce that number.

"There have been some system enhancements to ensure the vehicle is legitimate and that the person is a bonified employee of the dealership," said DMV Deputy Executive Director Roland Luna.

The tag redesign is on top of other changes at the DMV, including a dealer fingerprinting system.

Another recent chase in the area also started when a Kaufman County constable tried to pull over a car with a fake tag. After nearly three hours, the suspect was busted for having fentanyl, ecstasy and marijuana in the car.

"The fake tags, we are working on that every day," said Kaufman County Constable Jason Johnson. "I mean every time we turn around, there's a new paper tag out."

Texas DPS says the DMV is working with them, something that didn’t happen under past leadership.

"The issue is they're passing the eyeball. In other words, it goes by the cop, and it looks pretty good. Unless they run it, there's not an issue," he said. "There’s a ton more investigative value. But to the street cop, this isn't going to fix it."

"Our agency is very interested in doing anything we can to help fix the issue," he said. "We got a cop who lost his life, so it’s important to us."

The somber service was punctuated by solemn words, uplifting stories and heartfelt remarks from Officer Tsai’s sister. "Although my family and I are hurting, it truly warms my heart to know how welcomed, loved and respected he was wherever he went."

Senator John Whitmire (D-Houston) said the committee will meet again in January ahead of the next legislative session.

The head of the DMV is expected to provide an updated report on the paper plate problem. Chief Scesney was invited back to be part of that conversation.

When lawmakers return in January, they are expected to push for even more laws to be passed to stop the continued problem from happening.