Many firefighters wore full gear for the Walk for the Red 140.

Eric Peterson, a retired Mansfield firefighter, was at the front with a flag in hand. His son, Brandon, recently died of lung cancer.

"He didn’t deserve this. It should’ve been me," Peterson said.

Peterson was proud his son wanted to follow in his footsteps and fight fires. But after a decade on the job at the Lancaster Fire Department, Brandon was diagnosed with lung cancer in November 2019.

"Married… two kids 3 and 6 years old. It’s all about them now," Peterson said.

The group of North Texas firefighters set out from Celina on Thursday to raise awareness and funds for firefighters who have lost their lives due to line of duty cancer or who are still battling the disease. 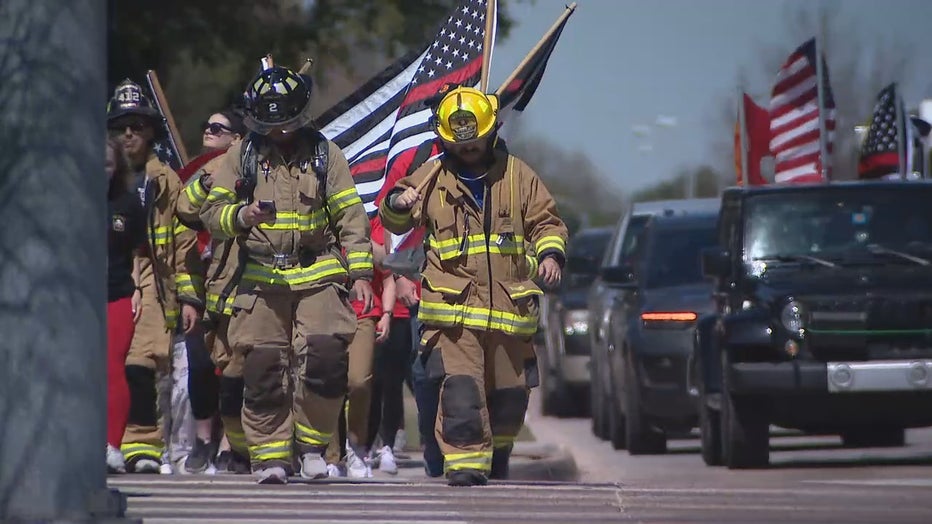 On Sunday, the Beckers joined for the final 20-mile home stretch through Plano, the place where Don Becker served since the 80s.

The 62-year-old died two years ago after dedicating nearly all his life to the job.

"To see him just deteriorate in front of your eyes is the hardest thing ever," said Marian Becker, a family member. "Nobody should go through what he and others have gone through. It’s a terrible thing."

Cancer is the leading cause of death among firefighters.

Walk for the Red 140 started in Michigan but the founder, Joseph Warne, is a native North Texan.

"Cancer awareness has got to be better for our firefighters all through the country and everywhere," Peterson said.

READ MORE: Suspect in custody after shootout with Dallas officers