Larry R. Brock Jr., whose address is listed in Grapevine, confirmed to the&nbsp;New Yorker that he was the man pictured wearing a&nbsp;helmet and military gear on the Senate floor.

GRAPEVINE, Texas - A retired lieutenant colonel in the Air Force Reserves was identified as one of the rioters who stormed the nation's Capitol Wednesday and proceeded to the Senate floor carrying zip ties as lawmakers fled.

Larry R. Brock Jr. confirmed to the New Yorker on Friday that he was the man pictured wearing a helmet and military gear on the Senate floor, after pro-Trump supporters forced their way into the building.

Multiple family members and a family friend told the New Yorker that Brock had become "increasingly radical," and that he posted to social media his plans to go to Washington D.C. for President Donald Trump’s rally.

The FBI is seeking information on the dozens of people seen storming the U.S. Capitol, and one of them has reportedly been identified as Brock Jr., who lives right here in North Texas.

In fact, he said he overheard Brock speaking to someone on the phone Saturday about keeping their cool.

"And he had a very authoritative, firm tone, and that’s why I noticed it as I was walking on by," Glahn recalled.

Brock is accused of rioting inside the Capitol in combat gear while carrying zip-ties. 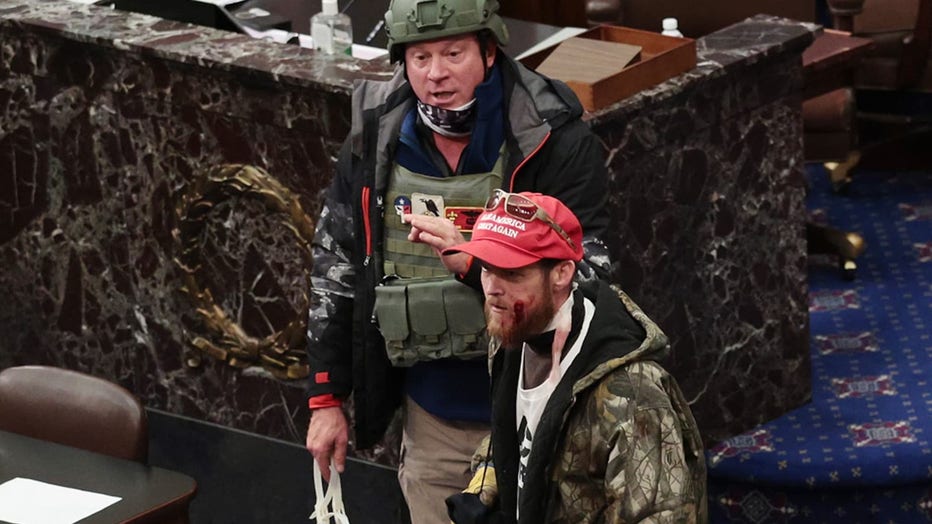 ADDITIONAL STORIES ON THE CAPITOL RIOT

Brock was working for Hillwood Airways in Fort Worth, which is part of the Perot family empire, headed by Ross Perot Jr.

The aviation company said Saturday that he’s no longer employed there.

FOX 4 attempted to speak with him at his listed address, but didn’t have access to get through the gate. No person answered when FOX 4 crews called and texted his listed cell phone number, and an employee at his leasing office declined to comment.

Brock could face criminal charges for his part in the Capitol riot.

The FBI has already arrested others who breached the Capitol.

"Some of them are not wearing masks and some are," he explained. "I think that this in itself is unique, however, we have had large venues, I mean, look at Charlottesville."

He believes there have always been groups wanting to rebel against the government, but "it doesn’t always show its ugly face."

Brock’s neighbor blames, what he calls, disinformation on social media, which might be radicalizing some to the point of crashing the Capitol.

"If those sources are not honest and reliable, then you’re going to end up with more conflict in the future," he said. "This could’ve been 10-times worse."

FBI Dallas is providing resources to the FBI’s Washington field office, but it declined to go on record about this case.

Brock has not been criminally charged as of Saturday.