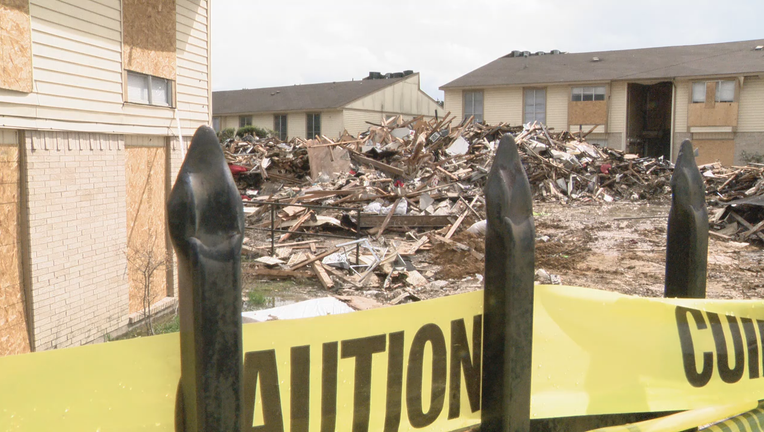 DALLAS - The city of Dallas said gas leaks have been found at an apartment complex that was the site of a natural gas explosion in late September.

The city said someone accidently left the gas on their stove on. After crews shut it off, they did a pressure check and discovered several more leaks.

One tenant who is still recovering from the September blast is concerned.

Atmos crews are expected to make repairs and turn the gas back on Thursday morning.

A few families impacted by September's explosion at a Southeast Oak Cliff apartment complex got some help for Christmas.

The September explosion was blamed on a gas leak caused by a man who shot into an apartment unit. He was charged in October.

Three Dallas firefighters were critically injured in the blast but all survived.

Ronald Hall, one of the firefighters who suffered second-degree burns and a broken leg, underwent surgery on his knee Wednesday.

Earlier this month, he talked about the complications he’s been dealing with.

"I had pins because with the burns they couldn’t fix my leg, so I had an ex brace. But my body didn’t like the pins going through. My leg is kinda big. All of my pin sites were getting infected," he said.

Doctors hope Wednesday’s operation is the last procedure Hall will need to recover.

A Dallas firefighter who was seriously injured in an apartment explosion is out of the hospital.