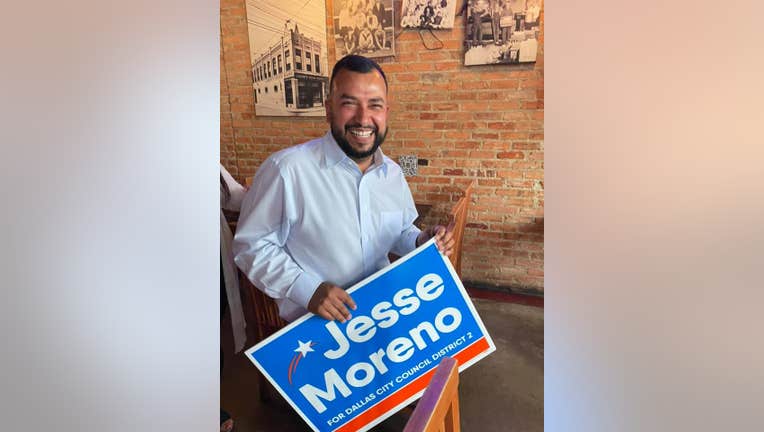 Jesse Moreno discussed his opponent revealing his tax liens, the potential return of rental scooters, changes to I-345, high property taxes, the city’s long development services wait and how he plans to be engaged in his district. Moreno, 36, is a small business owner and has served on the Dallas Park & Recreation Board.

Moreno defeated Sana Syed for the District 2 spot with 400-plus more votes in the June runoffs. Before the runoff took place however, Syed’s campaign publicized a document about a tax lien placed on Moreno’s house in 2015. His tax attorney, Mark Melton, explained in a D Magazine story that the situation did not occur due to "any incompetence or irresponsibility," but because of a record-keeping error.

"I am grateful for the community support. They did elect me, and we’re ready to start working," Moreno said. "The campaign is behind us, and I am here to represent the people."

Moreno’s predecessor, Adam Medrano, was involved in the removal of scooters from Dallas last September. With discussions now coming up about whether the city should bring them back, Moreno wants to meet the technology companies before he makes a final decision.

Another controversial topic Moreno has to address is the future of I-345. Any change made to the highway will directly impact his constituents in Deep Ellum since I-345 disconnects the neighborhood from downtown. The short interstate is currently elevated, but a proposal would remove it entirely. Other options from TxDOT include burying the highway.

Moreno said the council had a chance to hear public opinions in a meeting this past Tuesday.

"I’m still listening to my constituents, to the business owners in Deep Ellum, in the Farmers Market to see what they want and what they would like to see," Moreno said. "There’s still a lot of questions that need to be answered: where does traffic go, where do people park […] Those are all questions that I know that I still have, that I know many residents still have, and so right now we are definitely in a listening mode."

Because of the influx of businesses and people moving into Dallas, causing costs to become higher, Moreno’s biggest priority is housing.

"I really have learned over the past couple months that not everyone is looking for affordable housing when it comes to single family homes. There’s a lot of people, young professionals, young single families that need apartments or they’re traveling nurses," Moreno said. "We need to also make sure that those individuals have the apartments at an affordable rate."

He also wants to focus on keeping seniors from leaving Dallas by implementing tax breaks and tax freezes. Moreno explains that because they are living on fixed incomes, seniors are financially unprepared when their property taxes increase.

"It needs to be addressed because it’s the right thing to do," Moreno said. "Forcing someone out of their home, maybe making them homeless, someone who is a senior citizen who has hopefully still a few years to be able to be on this earth with us and they worked their entire lives and just to put them out, I just don’t see how anyone would be able to live with themselves doing that."

A main objective for Moreno for the next two years is to make Dallas a more user-friendly city for its residents and businesses. He recalls one scenario he experienced just this past weekend where a resident lost power on Friday but had to wait until Monday for a building inspector.

"We want to put policy in place that makes it easier to do business in the city and to live in the city, and so we need to definitely address our building inspection, sustainable development program. It’s just taking too long to get permits pulled," Moreno said.

Moreno promises to visit businesses and establishments in his district in an effort to be more engaged with his communities. He also plans to host various community meetings in different parts of District 2 every month.

This is the fourth of four stories FOX4 published this week about the new members of the Dallas City Council.